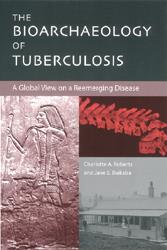 The Bioarchaeology of Tuberculosis
A Global View on a Reemerging Disease

Interacting with the Dead: Perspectives on Mortuary Archaeology for the New Millennium