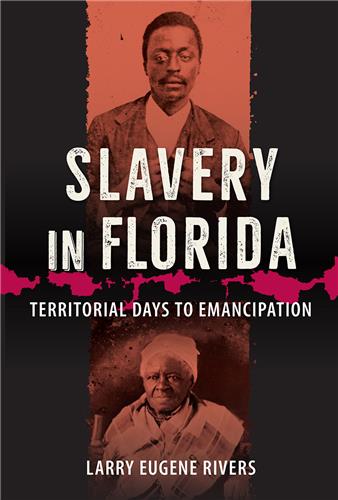 "This is the definitive account of slavery in Florida. It covers all aspects of the institution and the lives of those who were its victims. Especially revealing are its thorough examination of the slave family and its detailed account of the relations between black slaves and Seminole Indians. I know of no other state study that does as much so well."--George M. Fredrickson, Edgar E. Robinson Professor, Stanford University

"Applying the results of extensive research in the primary and secondary sources to a broad conceptual framework, Larry E. Rivers has written a comprehensive social history of slavery in Florida."--Jerrell H. Shofner, Professor of History Emeritus, University of Central Florida

"A highly significant study. . . . Rivers has brought Florida up to date in the field of American slavery. This study, well-written and based on a variety of sources, is balanced and informative."—William W. Rogers, professor emeritus of history, Florida State University

"Rivers has filled a tragically neglected gap in Florida’s published history. The evolution and complexities of slavery unfold from an easily readable narrative in a manner that will move the reader and shed new light on a key element of southern and African American history."—Canter Brown, Jr., historian in residence, Tampa Bay History Center


This important illustrated social history of slavery tells what life was like for bond servants in Florida from 1821 to 1865, offering new insights from the perspective of both slave and master.

Starting with an overview of the institution as it evolved during the Spanish and English periods, Larry E. Rivers looks in detail and in depth at the slave experience, noting the characteristics of slavery in the Middle Florida plantation belt (the more traditional slave-based, cotton-growing economy and society) as distinct from East and West Florida (which maintained some attitudes and traditions of Spain). He examines the slave family, religion, resistance activity, slaves’ participation in the Civil War, and their social interactions with whites, Indians, other slaves, and masters.

Rivers also provides a dramatic account of the hundreds of armed free blacks and runaways among the Seminole, Creek, and Mikasuki Indians on the peninsula, whose presence created tensions leading to the great slave rebellion, the Second Seminole War (1835-42).

Slavery in Florida is built upon painstaking research into virtually every source available on the subject--a wealth of historic documents, personal papers, slave testimonies, and census and newspaper reports. This serious critical work strikes a balance between the factual and the interpretive. It will be significant to all readers interested in slavery, the Civil War, the African American experience, and Florida and southern U.S. history, and it could serve as a comprehensive resource for secondary school teachers and students.

Larry Eugene Rivers, President of Fort Valley State University and professor of history, is the author of numerous works, and the recipient of the Arthur W. Thompson Award from the Florida Historical Society and the Carter G. Woodson Award from the Association for the Study of African American Life and History.

"Rivers does an admirable job at offering generalizations without losing sight of variation and particularity. Slavery in Florida is at its strongest, however, when Rivers addresses how Florida's history and geography produced conditions unlike those elsewhere in the American South." "We now have a more thorough understanding of the experiences and history with which Florida's freedpeople confronted emancipation." - Journal of Southern History
--Journal of Southern History

"Rivers's deeply researched and gracefully written book is the most comprehensive history of the "peculiar institution" in Florida available. Rivers's work is a model state study and deserves wide readership. For all college and university collections." -Choice
--Choice

"A fascinating account of a variant experience of an institution too often viewed from a single perspective."--Booklist
--Booklist

"A much needed work, one with permanent value and significance. A work totally void of stereotypes, one that honestly and carefully gives meaning to a human experience of profound significance to blacks and whites. At last Florida has a work on slavery that compares favorably with that of any other Southern state, and, equally important, it will stand for many years as the standard work on the subject." -Tallahassee Democrat
--Tallahassee Democrat

"This book is superb. It will be a valuable research tool for teachers, students, journalists and others. Slavery in Florida should be placed in every school and public library around the state." -The Stuart News
--Stuart News

"Rivers enlivens this monograph with anecdotes and has a deft way with them that allows readers to turn evidence to their own analytical purposes. This book deserves an audience among scholars who teach slavery and anyone interested in Florida history." - Civil War History
--Civil War History

"Is a heroic work, refreshingly free of theoretical dogma, that fairly explains how black men and women lived, labored and loved under the fierce weight of bondage in antebellum Florida." -Orlando Sentinel
--Orlando Sentinel

"This book is a significant contribution to the literature on antebellum slavery and fills a major gap in published Florida history." - Forum
--Forum

"He has admirably given a voice to Florida's enslaved men and women and put Florida slavery on the map of the history of the 'Old South.' Readable social history that is sure to appeal to local historians as well as to historians of the Deep South, where there are many ready comparisons within the slave experience to be made. Instructors could make good use of may of the chapters in their undergraduate classes. Rivers has produces a valuable study that. Along with Jane Landers' Black Society in Spanish Florida(1999) effectively fills a large gap in the existing historiography of slavery." Georgia Historical Quarterly
--Georgia Historical Quarterly

Mary Edwards Bryan: Her Early Life and Works
For a Great and Grand Purpose: The Beginnings of the AMEZ Church in Florida, 1864-1905
The Varieties of Women's Experiences: Portraits of Southern Women in the Post–Civil War Century