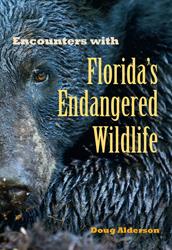 In search of the rare, the exotic, and the possibly extinct

"Speaks to anyone who has taken the time to actually observe wildlife in its natural setting."--Jay Liles, Florida Wildlife Federation

"In relating his personal encounters with rare and endangered wildlife throughout the state, Doug Alderson captures the spirit of wildlife conservation in Florida, illuminating the efforts of top Florida conservationists who are modern-day heroes educating an increasingly detached-from-nature public."--Sandra Friend, author of Exploring Florida’s Botanical Wonders

Eastern bison roamed Florida into the 1800s. Red wolves disappeared in the 1920s. The dusky seaside sparrow was declared extinct in 1990.

It's too soon to say whether the 116 threatened, endangered, or imperiled animal species currently found in the state will also fall victim to climate change, extermination, overdevelopment, or poisons. But as long as they remain, there will be men and women who work tirelessly on their behalf.

Combining adventure, natural history, and cultural history, Encounters with Florida’s Endangered Wildlife features chapters tracking panthers, black bears, whooping cranes, manatees, sea turtles, even ivory-billed woodpeckers--which may or may not be extinct. Join Doug Alderson as he travels into prairies, woods, springs, and ocean to come face to face with these and other captivating creatures and learns firsthand about their strangled lives and fragile habitats.

With a chapter on the impact of non-native populations of Burmese pythons and Rhesus monkeys, as well as a chilling epilogue that imagines the peninsula one hundred years in the future, this book is a must-read for anyone who wants to know more about the current state of wild Florida.

Doug Alderson, former associate editor of Florida Wildlife magazine and current Florida Paddling Trails Coordinator for the Florida Department of Environmental Protection, is the author of New Dawn for the Kissimmee River, Waters Less Traveled, and The Ghost Orchid Ghost and Other Tales from the Swamp.

"A must read for anyone who wants to know more about the current state of wild Florida."
--Animal Keepers' Forum

"Mixes awe, affection and education in these remarkably well-turned essays, which often blossom into a powerful lyricism."
--Florida Weekly