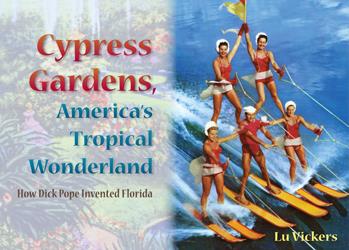 "At Cypress Gardens--the original Florida theme park--movie stars, water-ski champs, and southern sweethearts created magic. More than anyone, even Walt Disney, Dick Pope Sr. invented Florida as America's dream vacationland. This journey back to the attraction in its heyday brims with wonderful images, true tales, and the author's great love for and understanding of the real Florida."--Joy Wallace Dickinson, author of Orlando: City of Dreams

To the average person weathering a New England winter, Dick Pope's Cypress Gardens must have looked even more exotic than a trip to Alice's Wonderland. The images coming out of his promotional powerhouse appeared in magazines, newspapers, newsreels, and movies. These Technicolor glories depicted everything from bathing beauties aquaplaning through walls of fire to southern belles relaxing beneath huge tropical plants, from Don Ameche proposing to Betty Grable under moss-hung cypress trees to Esther Williams performing a water ballet in the famous Florida-shaped pool.

It was all happening in sleepy Winter Haven, where one real estate maverick turned tourism tycoon was out to sell "100,000 [visitors] 25 cents worth of Florida."

Brilliantly illustrated with over 250 vibrant images, Cypress Gardens, America's Tropical Wonderland reveals the empire Dick Pope built from its origins as remote swampland to its heyday as a famous water-sports destination and playground for such stars as Joan Crawford, Johnny Carson, and Carol Burnett, as well as royalty from the Duke and Duchess of Windsor to King Hussein of Jordan.

Lu Vickers also discusses the park's decline following the construction of Walt Disney World, changes in management, the evolving interests and vacationing habits of the nation, as well as its outlook for the future as a part of LEGOLAND Florida.

Lu Vickers is the author of Breathing Underwater and Weeki Wachee, City of Mermaids: A History of One of Florida's Oldest Roadside Attractions.

"Ms. Vickers tells the tale of Cypress Gardens in well-fashioned chapters into which she has crammed an encyclopedia of Florida history. The story is told as well by the dazzling color photographs, 262 in all, that enliven its pages."
--Fort Myers Florida Weekly

Those interested in tourism, popular culture, marketing, or advertizing will find that this book has a lot to offer.
--CHOICE

"Vickers tells the Cypress Gardens story in a breezy affectionate manner. Her obvious fondness for both Cypress Gardens and the Florida it represented comes through on every page."
--H-Net Reviews