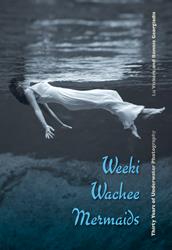 "The Weeki Wachee mermaids have been entertaining Florida tourists for more than six decades, and this book takes us into their underwater world to learn how they managed to perform such amazing feats--with very little opportunity to breathe!"--Tim Hollis, author of Selling the Sunshine State

"Just as deeply as the mermaids dove into the depths of the springs itself, Lu Vickers has delved into the history of Weeki Wachee. She leads us to an understanding of how and why the mermaid shows mesmerized people."--Gary Monroe, author of Silver Springs: The Underwater Photography of Bruce Mozert

By the late 1940s, long before Disney dreamed of building a magic kingdom in central Florida, the state had more botanical gardens, jungles, monkeys, parrots, and glass-bottomed boats than a tourist could shake a camera at. But only one place had banana-eating mermaids, and that was Weeki Wachee.
Located about forty-five miles north of Tampa, and still in existence today, Weeki Wachee has been featured in major motion pictures and visited by astronauts, movie stars, and Elvis Presley. Like everyone else, they came to see the famous mermaids--in actuality, highly trained swimmers and divers.
Weeki Wachee Mermaids features rare, never-before-published vintage photographs, postcards, and publicity shots taken over a thirty year period, starting with the first performance in 1947 and ending with the extravagant "underwater Broadway " shows created by the corporate owners of ABC-TV. The water was so clear, and the scenarios so cleverly straightforward that audiences initially doubted that the show was really underwater, and newspaper editors across the country suspected the photographs might be fake.
Lu Vickers's accompanying text retraces the origins of the attraction, particularly the ways that entrepreneur and underwater photography pioneer Newt Perry set Weeki Wachee apart from all the other springs in Florida. Coauthor Bonnie Georgiadis, who was in junior high when the park opened, eventually worked thirty-seven years at the park, first as a mermaid, later as a choreographer, and eventually as a falconer.

"…captures the mermaids' unique virtues -- and the pictures that immortalize them -- taking us underwater with the beloved Florida icons."
--Creative Loafing Tampa

"The lovely images here combine with text describing the attraction's origions, evolution, and promotion with special attention to how the efforts of business and a pioneering underwater photographer succeeded in creating a marvel that has lasted for decades."
--Midwest Book Review

"pure Floridiana and a lot of fun."
--Palm Beach Post