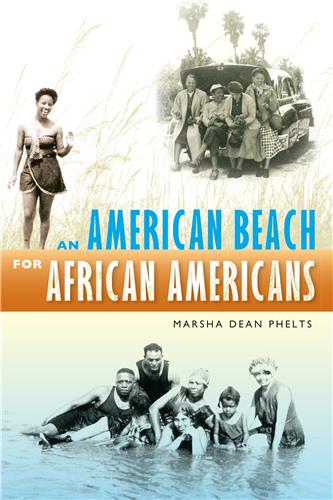 An American Beach for African Americans


"I am excited by this book. It is a great addition to the woefully scant scholarly materials that deal with the African American contribution to Florida history and culture. . . . Original and significant."--Patricia Waterman, University of South Florida

"The most detailed study that has been done on the history of American Beach. . . . A work of quality . . . very much welcomed."--Isiah J. Williams III, publisher and editor, Jacksonville Advocate

In the only complete history of Florida’s American Beach to date, Marsha Dean Phelts draws together personal interviews, photos, newspaper articles, memoirs, maps, and official documents to reconstruct the character and traditions of Amelia Island’s 200-acre African American community. In its heyday, when other beaches grudgingly provided only limited access, black vacationers traveled as many as 1,000 miles down the east coast of the United States and hundreds of miles along the Gulf coast to a beachfront that welcomed their business.

Beginning in 1781 with the Samuel Harrison homestead on the southern end of Amelia Island, Phelts traces the birth of the community to General Sherman’s Special Field Order No. 15, in which the Union granted many former Confederate coastal holdings, including Harrison’s property, to former slaves. She then follows the lineage of the first African American families known to have settled in the area to descendants remaining there today, including those of Zephaniah Kingsley and his wife, Anna Jai.

Moving through the Jim Crow era, Phelts describes the development of American Beach’s predecessors in the early 1900s. Finally, she provides the fullest account to date of the life and contributions of Abraham Lincoln Lewis, the wealthy African American businessman who in 1935, as president of the Afro-American Life Insurance Company, initiated the purchase and development of the tract of seashore known as American Beach. From Lewis’s arrival on the scene, Phelts follows the community’s sustained development and growth, highlighting landmarks like the Ocean-Vu-Inn and the Blue Palace and concluding with a stirring plea for the preservation of American Beach, which is currently threatened by encroaching development.

In a narrative full of firsthand accounts and "old-timer" stories, Phelts, who has vacationed at American Beach since she was four and now lives there, frequently adopts the style of an oral historian to paint what is ultimately a personal and intimate portrait of a community rich in heritage and culture.

Marsha Dean Phelts, author of The American Beach Cookbook, is a contributor to the Florida Star newspaper and spent many years as a librarian in the Florida geneaology department of the Jacksonville Public Library.

"This nostalgic folk history of a Florida beach that welcomed generations of vacationing blacks throughout the grim era of segregation and Jim Crow is so rich in anecdote, character study, customs and the abundance of nature (not to mention the 106 b&w photos) that it could almost serve as a tourist guidebook - right down to the homespun recipes." "This is a lively story of a place marked by community, sociability and food, where generations of families found an oasis from racism. Phelts draws the reader so thoroughly into the everydat life of American Beach that by the final chapter, when she describes the natural disasters, white development and, most tragically, recent police violence (including the shooting of four unarmed African American men between 1990 and 1994) that threaten the community, one feels one's own childhood has been menaced."
--Publishers Weekly

"Marsha Dean Phelts uses facts, photographs, profiles, memories and recipes to tell a story as intimate as the epics we enjoy over pie and coffee. It's less a book about racial discrimination than it is a story of the consequences for the people of a particular community and their triumph over confinement." "If Phelts' wish to preserve the historical American Beach proves to be frustrated by progress, at least we will have this record. Here, those who never knew American Beach will get a taste of its rich history; those who visited it in its heyday will find material for some lively dinner-table conversations."
--Tampa Tribune

"This book is both distinctive and valuable as one of the relatively few books on African Americans in Florida and as one of the even smaller number of publications treating the subject of well-to-do blacks. It also contains a readable discussion of various customs and traditons associated with the beach's history. A particularly tasty addition is the inclusion of several recipes."
--Choice

"the vivid, personal story of American Beach, a coastal community on Amelia Island in northeastern Florida. . . . blends oral history with never-before-collected documents dating back to the turn of the century, including photographs, historical records, and even recipes for such local favorites as Daddy Charlie's Jamaican Con Pollo. A member of the American Beach community with a long family connection to the place, Phelts gives us the view from inside."
--Preservation