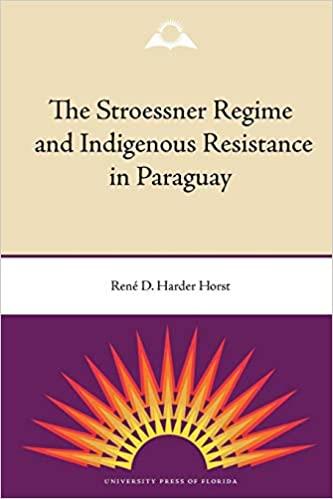 The Stroessner Regime and Indigenous Resistance in Paraguay

"Provides original insights into the makings of indigenous policy during Paraguay's Stroessner era and the democratic opening after 1989 . . . shows how state policies were buffeted by external actors but also how indigenous peoples fought back. A must-read for those interested in indigenous policy in Latin America."-- Erick D. Langer, Georgetown University

"A significant contribution to the field . . . It develops a rich understanding of continuities and change in Paraguayan history, including the role of religious missions in indigenous assimilation and/or cultural preservation."--Virginia Garrard Burnett, University of Texas, Austin

Native groups have played an important historical role in Paraguay, the most homogenous and the only officially bilingual country in Latin America. This book analyzes their complex relationship with the corrupt Alfredo Stroessner regime (1954-89), which framed its policies as inclusive but excluded Paraguay's indigenous people from the benefits of national development and the most basic human rights. However, this is not a history of oppression and victimhood but rather a study in manipulation. Horst argues that while native people struggled daily to secure food and work under Stroessner's often contradictory and heavy-handed policies, they refused to disappear anonymously into the larger peasant population. As savvy actors who manipulated difficult circumstances to foil exclusionary policies, they succeeded in publicly embarrassing the regime as often as possible through exposures of state corruption.

Working in close cooperation with the Catholic Church, indigenous peoples capitalized on Catholic legal advocacy in their struggles to defend their territories and resources. The church became the strongest defender of native land claims, drawing international attention to the plight of indigenous peoples as well as abuses of human rights. While indigenous resistance weakened support for the Stroessner regime, it also drove native leaders and peoples into closer interaction with and dependency upon the very national institutions they opposed.

Contributing their own vision of a multiethnic state, the native people of Paraguay created multiple alliances with regime opponents, found ways to draw attention to human rights, and by demanding tolerance of ethnic plurality helped lead the nation toward greater democracy in 1992. Horst's study--the only history to focus on recent social policies and national political strategies for indigenous populations in modern Paraguay-- provides an important narrative for historians of Paraguay and other parts of Latin America, as well as for anthropologists and others interested in the intersection of identity politics and human rights.

" This impressive study explores some interesting scholarly territory in a focused and synthetic way. Horst tries to see the dictatorship through Indian eyes, and ends up making a decidedly nuanced contribution. Stroessner was overthrown in 1989, but many of the challenges that Indians face in a democratic Paraguay are still daunting. To understand where they came from, and where they hope to go, start with this book."
--The American Historical Review

" Important for understanding both the Stroessner regime and Paraguay's indigenous population."
--The Catholic Historical Review

" Provides valuable insight into the ways policy influences society and its institutions, including the church."
--Mission Focus, a publication of the Mennonite Biblical Seminaries

"A welcome addition to Paraguayan historiography and the ethnohistory of South American Indians."
--The Americas

"A well-researched effort on the part of Horst to understand the workings of the Stroessner dictatorship. This investigation will be of particular interest to students of indigenous rights, dictatorship, and missionary history."
--Hispanic American Historical Review

"Offers a richly detailed account of the complex dynamics between governmental policies that were directed toward Indigenous peoples and the responses that Indigenous peoples devised in the face of those policies during the 35-year-long regime (1954-89) of General Alfredo Stroessner. A "must read" for anyone interested in Indigenous issues in Paraguay."
--Canadian Journal of Latin American and Carribean Studies