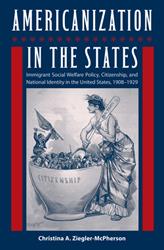 Americanization in the States
Immigrant Social Welfare Policy, Citizenship, and National Identity in the United States, 1908–1929

"Makes a formidable contribution to U.S. immigration history by addressing historical and contemporary debates about national identity and the place of immigrants within American society."--Brian Gratton, Arizona State University

"Deepens and clarifies our understanding of this understudied but very important social movement by comparing and contrasting those Americanization efforts aimed at protecting immigrants with those more coercive educational programs which we have previously thought to encompass the entire movement."--John F. McClymer, Assumption College

In the first decades of the twentieth century, a number of states had bureaus whose responsibility was to help immigrants assimilate into American society. Often described negatively as efforts to force foreigners into appropriate molds, Christina Ziegler-McPherson demonstrates that these programs--including adult education, environmental improvement, labor market regulations, and conflict resolutions--were typically implemented by groups sympathetic to immigrants and their cultures.

Americanization in the States offers a comparative history of social welfare policies developed in four distinct regions with diverse immigrant populations: New York, California, Massachusetts, and Illinois. By focusing on state actions versus national agencies and organizations, and by examining rural and western approaches in addition to urban and eastern ones, Ziegler-McPherson broadens the historical literature associated with Americanization.

She also reveals how these programs, and the theories of citizenship and national identity used to justify their underlying policies, were really attempts by middle-class progressives to get new citizens to adopt Anglo-American, middle-class values and lifestyles.

Christina A. Ziegler-McPherson is a public historian who lives in New Jersey.

"A heavily researched and thoughtful read. Highly recommended as a balanced perspective on a complex social issue."
--The Midwest Book Review

"As the US again confronts large numbers of new arrivals, this historic study of assimilation contributes to the knowledge base that can help contemporary Americans respond to the nation's latest immigrant influx."
--Choice

"Christina A. Ziegler-McPherson challenges her readers to rethink what they know about Americanization efforts in the first third of the twentieth century." "Those who read it will come away with new insights about immigration and Americanization not only in the first three decades of the twentieth century but in the twenty-first century as well."
--Journal of American History

Places Americanization in the broader context of Progressive era reforms and interprets the concept broadly, considering a wide range of initiatives involving labor conditions, housing, and services from immigrants as well as diverse educational efforts.
--Journal of Social History