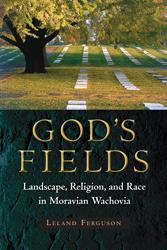 "Provides a fascinating and nuanced study of the transformations in religious and social ideals among Moravians as they worked to implement their aspirations in the harsh realities of a North Carolina landscape shaped by racism. Ferguson reveals the intersecting dynamics of religious aspirations, sectarian prejudices, conflicting designs across cultural landscapes, paradoxical divergences of religious ideals and social realities, and the life stories of African Americans working to navigate such contested terrain."--Christopher C. Fennell, author of Crossroads and Cosmologies

"A fascinating examination of the tension of race relations in the antebellum South. God's Fields unfolds like a murder mystery and is hard to put down."--Christopher E. Hendricks, author of The Backcountry Towns of Colonial Virginia

The Moravian community of Salem, North Carolina, was founded in 1766, and the town--the hub of nearly 100,000 piedmont acres purchased thirteen years before and named "Wachovia"--quickly became the focal point for the church's colonial presence in the South.
While the brethren preached the unity of all humans under God, a careful analysis of the birth and growth of their Salem settlement reveals that the group gradually embraced the institutions of slavery and racial segregation in opposition to their religious beliefs. Although Salem's still-active community includes one of the oldest African American congregations in the nation, the evidence contained in God's Fields reveals that during much of the twentieth century, the church’s segregationist past was intentionally concealed.
Leland Ferguson's work reconstructing this "secret history" through years of archaeological fieldwork was part of a historical preservation program that helped convince the Moravian Church in North America to formally apologize in 2006 for its participation in slavery and clear a way for racial reconciliation.

Leland Ferguson is Distinguished Professor Emeritus of anthropology at the University of South Carolina. He is the author of Uncommon Ground: Archaeology and Colonial African America, 1650-1800, a recipient of the Southern Anthropological Society's James Mooney Award.

"A very readable work that shows the changes in the ways Moravians dealt with race, which eventually led to spiritual and geographical segregation."
--C. Riddick Weber, Journal of Southern Religion

"Offers something different, and valuable, to historians of religion as it weaves back and forth between the present and the past, mixing first-person recollections with explorations into Moravian slavery and religious practices….It is a strong study and an excellent read, written by a talented archaeologist whose knowledge of African American life in the colonial South is impressive."
--H-Net Reviews

"Serves as a valuable corrective to the traditional myopia regarding the place of the black congregation within Salem's history."
--The Journal of Southern History

"Explores unspoken details how white Moravians changed their treatment of African Americans during the late eighteenth century...a culmination of teamwork that weaves together diverse data sets and contributes to racial reconciliation for the area’s Moravian and general communities...It also stands as an important social justice model for parties inside and outside the United States."
--Journal of Moravian History

"Presents both compelling narrative and morally responsible historical archaeology...there is much to admire in this well-written and thoroughly engaging volume."
--Southeastern Archaeology Summer 2013

“A strong study and an excellent read, written by a talented archaeologist whose knowledge of African American life in the colonial South is impressive.”
--H-Net Reviews