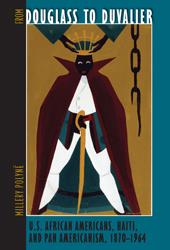 "A remarkable new analysis of how African Americans and Haitians interacted over the long term. It asserts bold new methods and conclusions on inter-American relations, Pan Americanism, and U.S.-Haitian relations."--David Sheinin, Trent University

"Polyné has provided a clearly written, nuanced, deeply researched study about the multiple efforts among the Haitian and African American elite to advance both their national agendas and larger global commitments to the diaspora. No one has focused on Haiti the way he has." --Carol Anderson, Emory University

"Adds an important and much-needed layer to our understanding of the strengths and weaknesses of diasporic relations."--Carol Anderson, Emory University

Haiti has long been both a source of immense pride--because of the Haitian Revolution--and of profound disappointment--because of the unshakable realities of poverty, political instability, and violence--to the black diasporic imagination. Charting the long history of these multiple meanings is the focus of Millery Polyne's rich and critical transnational history of U.S. African Americans and Haitians.

Stretching from the thoughts and words of American intellectuals such as Frederick Douglass, Robert Moton, and Claude Barnett to the Civil Rights era, Polyne's temporal scope is breathtaking. But just as impressive is the thematic range of the work, which carefully examines the political, economic, and cultural relations between U.S. African Americans and Haitians.

From Douglass to Duvalier examines the creative and critical ways U.S. African Americans and Haitians engaged the idealized tenets of Pan Americanism--mutual cooperation, egalitarianism, and nonintervention between nation-states--in order to strengthen Haiti's social, economic, and political growth and stability. The depth of Polyne's research allows him to speak confidently about the convoluted ways that these groups have viewed modernization, "uplift," and racial unity, as well as the shifting meanings and importance of the concepts over time.

"Most works on Haiti tend to focus either on the Haitian Revolution (1791-1804) or the more recent era of Jean Bertrand Aristide (1991-2004), and specifically the US-supported coup in 2004. In excluding these two seismic eras, Polyne (NYU) tells a more important story of the forging and gradual weakening of ties between US African Americans and Haitians. Impressive temporally and thematically, well researched, and destined to be an important work."
--Choice, vol. 48 n.4

"Whether or not the catastrophic events of 2010, which included a massive outpouring of support from US African Americans in various domains, will inspire a return to the Black Pan-American vision of the twentieth century remains to be seen. The tension between Haitian realities and the US imagination nonetheless lingers. The great value of Polyné's work is that it provides the reader with a much-needed sense of how this tension has operated in the relationship between US African Americans and Haitians." "A sober reminder that the quest for inter-American support for Haitian improvement has a long and chequered history."
--Social and Economic Studies

"Widens our understanding of the Americas for the discipline of American Studies and paves the way for new and stimulating discussions in the fields of history and African American and Haitian studies. [Polyné] has ignited a welcome and relevant debate about the concept and practice of black Pan-Americanism, which should be applied to all parts of the Americas. The book is a strong addition to hemispheric American Studies."
--The Americas 69:3

"A most welcome addition to several fields, including Haiti-U.S. relations, foreign policy, and transnational studies...with the work, the myth of Pan American architects back into the pages of history."
--American Studies Journal