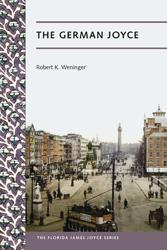 
“A valuable contribution to scholarship on Joyce”—Comparative Critical Studies

"The first comprehensive account of the enormous impact of Joyce on German modernist and postmodern writers. An indispensable book on Joyce's 'German' face."—Gerald Gillespie, Stanford University

In August 1919, a production of James Joyce's Exiles was mounted at the Munich Schauspielhaus and quickly fell due to harsh criticism. The reception marked the beginning of a dynamic association between Joyce, German-language writers, and literary critics. It is this relationship that Robert Weninger analyzes in The German Joyce.

Opening a new dimension of Joycean scholarship, this book provides the premier study of Joyce's impact on German-language literature and literary criticism in the twentieth century. The opening section follows Joyce's linear intrusion from the 1910s to the 1990s by focusing on such prime moments as the first German translation of Ulysses, Joyce's influence on the Marxist Expressionism debate, and the Nazi blacklisting of Joyce's work. Utilizing this historical reception as a narrative backdrop, Weninger then presents Joyce's horizontal diffusion into German culture.

Weninger succeeds in illustrating both German readers' great attraction to Joyce's work as well as Joyce's affinity with some of the great German masters, including Goethe and Rilke. He argues that just as Shakespeare was a model of linguistic exuberance for Germans in the eighteenth century, Joyce became the epitome of poetic inspiration in the twentieth.
This volume, through Weninger's critiques and repositions, simultaneously revisits the fraught relationship between influence and intertextuality in literary studies and reassesses their value as tools for contemporary comparative criticism today.

Robert K. Weninger, emeritus professor of German and comparative literature at King’s College London, is author or editor of over ten books, including Arno Schmidts Joyce-Rezeption 1957-1970: Ein Beitrag zur Poetik Arno Schmidts, and is a past editor of the Journal of Comparative Critical Studies.

"A book to which anyone interested in Joyce may turn for a lucid and detailed summary of what Joyce has meant to German authors and German culture… Clearly written, easily accessible to non-German speaking readers…The single best source for understanding Joyce's very special role in German Literary culture."
--James Joyce Literary Supplement

“Weninger succeeds admirably… in demonstrating the widespread, intricate, and abiding influence of Joyce on German writers.”
--English Literature in Transition

“Weninger powerfully argues the case for viewing Shakespeare as the most significant English-language author for the eighteenth and nineteenth centuries in German-speaking lands, and Joyce as filling that role in the twentieth century and down to the present.”
--Literary Research

“Weninger articulates a lucid and sophisticated argument, delivering with rhetorical dexterity, elegance, and wit a persuasive study on the relationship between James Joyce and the German speaking world... no other study has probed Joyce’s German influence in such a comprehensive and systematic way.”
--Arcadia: International Journal of Literary Culture

“A very considerable contribution to our understanding of the international range, impact, and resonance of Joyce’s work.”
--James Joyce Quarterly

“The German Joyce is the sort of multifaceted work that can only be achieved through patient, long-term scholarly investigation. Weninger is to be congratulated on the richness of what he has to show us here about the about the importance of Joyce as a reference-point for the understanding of modern German literary culture.”
--Modern Language Review

Weninger’s exemplary study reveals a further example of the astonishing and admirable openness of German literary culture to influences outside its own narrow ambit.
--Comparative Literature Studies