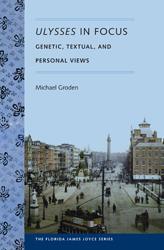 "What if you had never opened the book of your life? Or if that book had been even a little different? Ulysses in Focus takes up these vertiginous questions, raveling out episodes in the writing, critical reception, and editing of Joyce's masterpiece and twining them together with stories from a life spent elucidating it. Joyce himself would have admired the variety that Michael Groden offers us here: fascinating new readings of Ulysses by its foremost genetic critic; behind-the-scenes accounts of editorial contretemps and secret manuscript acquisitions; the sorrow of shelved projects and the thrill of the bibliographic quest. At its core, Ulysses in Focus tells the story of a reader and a book that seem to have been destined for one another. Yet its method is against destiny, seeking to free texts from the published state in which they ossify by restoring to us a sense of their evolution and their contingency. To read Groden is to think differently about reading and being: to suspect that a book, like a life, might be the sum of its untaken roads."--Paul K. Saint-Amour, University of Pennsylvania

"This is an engaging, reflective, and highly personal set of essays and recollections by a leading Joyce scholar. It urges us to see Ulysses, not as a finished monument, but as a mobile piece of writing in constant dialogue with its own processes of composition and avant-textes."--Anne Fogarty, coeditor of Bloomsday 100: Essays on Ulysses

Michael Groden has been at the forefront of some of the most important developments in James Joyce studies over the past three decades. He was a major figure in and early adopter of genetic scholarship--the method of analyzing a literary work by looking at its development from draft to draft, particularly suited to Joyce's stories and novels. He defended Hans Walter Gabler's Ulysses edition in the "Joyce Wars" and helped introduce the National Library of Ireland's new Joyce manuscripts to the world.

Bringing together twelve essays in three areas of Joyce criticism and scholarship, this refreshing book offers various personal adventures from a life lived with Joyce’s work. In a manner that is at once modest, rigorous, and accessible, Ulysses in Focus engagingly connects these scholarly developments and contretemps to the author's personal history and provides fascinating new genetic readings of several episodes of Ulysses that advance our understanding of the novel’s composition.

Michael Groden is Distinguished University Professor of English at the University of Western Ontario.

"Groden entwines critical insights with intimate confessions in Ulysses in Focus: Genetic, textual, and personal views. Humbled by Ulysses, profoundly grateful for its invitation to make imaginative connections with other minds, he testifies to the fact that there is no reason for anyone to be afraid of James Joyce - quite the opposite."
--For Love of Molly - Times Literary Supplement

"Michael Groden's Ulysses in Focus...is a many splendored thing. As a primer for genetic criticism, it serves effectively. As a defense of textual scholarship, it argues persuasively. As an apologia for Groden's life choices (professional and private), it engages and entertains elegantly."
--English Literature in Translation 1880-1920

"Warm and inviting, as well as challenging in the best possible sense." … "Vitally important, particularly for the historical discussion of his own experience in genetic criticism in general, and his manuscript work specifically."
--James Joyce Quarterly

"Bring[s] together in one place both the meaning of the book and the deeply personal reasons for reading it...reminds us that real books do indeed read us, that we bring them close to us the better to see ourselves, and that we keep looking at them because their wisdom turns out to be stronger than our own."
--Common Knowledge Fall 2013