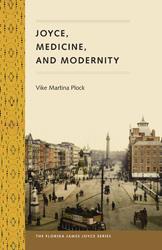 "For everyone interested in Joyce and medicine--and everyone who reads Joyce should be--Vike Plock's Joyce, Medicine, and Modernity is an excellent place to start. The scholarship is deep and sound, the commentary on Joyce often illuminating, the whole production eminently readable. Those interested in the scientific climate of modernism in general will also find much to learn from."--John Gordon, Connecticut College

"An informative, useful, and often delightful study of the intersections of contemporary medical and 'pseudo-medical' science and Joyce's fiction, from Dubliners through Ulysses. In her readings, Plock demonstrates that Joyce assimilated much from medical discourses, despite his resistance to medicine's regulating and patrolling propensity in modern culture."--Thomas J. Rice, University of South Carolina

James Joyce's interest in medicine has been well established--he attempted to embark on medical studies no fewer than three times--but a comprehensive assessment of the influence his interest in medicine had on his work has been lacking until now. Joyce, Medicine, and Modernity fills that gap as the first sustained study of Joyce's artistic uses of turn-of-the-century medical discourses.

In this wide-ranging study, author Vike Plock balances close readings of Joyce's major texts with thorough archival research that retrieves principal late nineteenth- and early twentieth-century medical debates. The result is a fascinating book that details the ways in which Joyce reconciled, integrated, and blurred the paradigmatic boundaries between scientific and humanist learning.

Vike Martina Plock is lecturer in English at the University of Exeter.

"An important and rewarding intervention in both Joyce scholarship and the study of literature and science. Its thoughtful research and admirably clear written style are the building blocks of its major contribution: an attentiveness to how science might shape not simply fiction's content but, more intriguingly, its form."
--The British Society for Literature and Science