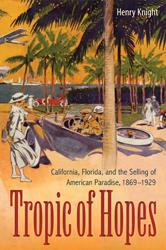 Tropic of Hopes
California, Florida, and the Selling of American Paradise, 1869-1929


“A rare comparative history of tourism development, one that makes a variety of connections: between peninsular Florida and southern California, between tourist and agricultural promotion of each, and between each of these areas and the rest of their respective states.”—Reviews in American History

"Pushes aside the palm fronds celebrated by boosters to explain how the nineteenth-century frontiers of barren southern California and waterlogged southern Florida were reimagined as havens for American leisure and agriculture. This is the story of the birth of modern America."--Anthony J. Stanonis, author of Creating the Big Easy: New Orleans and the Emergence of Modern Tourism, 1918–1945

"A refreshingly original and subtly nuanced study of how nineteenth- and twentieth-century boosters sold Florida and California as ‘semi-tropical’ lands worthy of serious attention. With clarity and insight, Knight provides an instructive and provocative look at the peculiar machinations of identity formation in America."--Rebecca McIntyre, author of Souvenirs of the Old South: Northern Tourism and Southern Mythology


After the Civil War, two states emerged as America’s paradise destinations. Transformed from remote, sparsely populated locales into two of the most publicized destinations in the country, California and Florida also became the most desirable. Private companies, state agencies, and journalists all lent a hand in creating the seductive, expansionist imagery that promoted the semitropical states, selling the idea of an attainable paradise within the United States.


Henry Knight examines and compares the way the two states were promoted, adding to existing historiographies on California and Florida while providing expert analysis of how railroad kingpins, land barons, agriculturalists, and chambers of commerce invented and popularized an image of these states as the American Paradise.


Henry Knight is lecturer in American studies at Northumbria University.

Represents almost a decade of extensive inquiry into the Anglo-dominated promotional machine that reimagined California from a desert wasteland to a costal paradise, and Florida from a backwater swamp to a lush homeland. . . . An eye-opening appraisal. . . . Highly recommended.
--Choice

Deserves the attention of scholars interested in how climate is socially constructed and how places are strategically promoted.
--Journal of American History

An engaging, insightful book that offers us a cultural history of economic development in an era when health, independence, and the good life itself were being redefined.
--Business History Review

A rare comparative history of tourism development, one that makes a variety of connections: between peninsular Florida and southern California, between tourist and agricultural promotion of each, and between each of these areas and the rest of their respective states.
--Reviews in American History

A valuable addition to current environmental and urban histories dealing with the significance, malleability, and sale of climate, and contributes to a broader political project that links the American West and South.
--Southern Historian