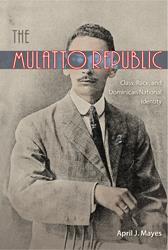 
"Impels the reader to not lean solely on the crutch of Dominican anti-Haitianism in order to understand Dominican identity and state formation. Mayes proves that there was a multitude of factors that sharpen our knowledge of the development of race and nation in the Dominican Republic."--Millery Polyné, author of From Douglass to Duvalier

"A fascinating book. Mayes discusses the roots of anti-Haitianism, the Dominican elite, and the ways in which race and nation have been intertwined in the history of the Dominican Republic. What emerges is a very interesting and engaging social history."--Kimberly Eison Simmons, author of Reconstructing Racial Identity and the African Past in the Dominican Republic


The Dominican Republic was once celebrated as a mulatto racial paradise. Now the island nation is idealized as a white, Hispanic nation, having abandoned its many Haitian and black influences. The possible causes of this shift in ideologies between popular expressions of Dominican identity and official nationalism has long been debated by historians, political scientists, and journalists.


In The Mulatto Republic, April Mayes looks at the many ways Dominicans define themselves through race, skin color, and culture. She explores significant historical factors and events that have led the nation, for much of the twentieth century, to favor privileged European ancestry and Hispanic cultural norms such as the Spanish language and Catholicism.


Mayes seeks to discern whether contemporary Dominican identity is a product of the Trujillo regime--and, therefore, only a legacy of authoritarian rule--or is representative of a nationalism unique to an island divided into two countries long engaged with each other in ways that are sometimes cooperative and at other times conflicted. Her answers enrich and enliven an ongoing debate.


April J. Mayes is professor of history at Pomona College.

Publication of the digital edition made possible by a Sustaining the Humanities through the American Rescue Plan grant from the National Endowment for the Humanities.

Mulatto Republic contributes immensely to an alternative analysis of anti-black identity and will undoubtedly inspire other researchers to probe deeply into the once-safe assumption that the anti-Haitian and Trujillato dictatorship provided the formidable answer to the question of identity formation in the Dominican Republic.
--The Caribbean Quarterly

Seeks... to unravel what appears or figures as a mystery: that of the racial imaginary in a society like the Dominican, in which the black presence is undeniable, but in which, as contradictory as it looks, monumental efforts have been made... to deny it.
--A Contra Corriente

One of the best and most thoroughly researched contributions to Dominican history in several years.
--H-Net Reviews

An unequivocal contribution to the scholarship, adding significantly to the conversation about race and Dominican identity and opening up new repertoires of inquiry and research.
--Hispanic American Historical Review

This rich and highly readable synthesis of racial thought in San Pedro demonstrates that Dominican ideas about race evolved in dialogue and in struggle with a series of interlocutors, not just its western neighbor.
--New West Indian Guide