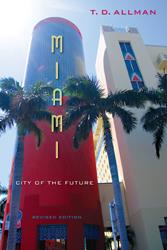 "An exuberant portrait of the city."--New York Times Book Review

"As entertaining and as distracting as the city itself."--Washington Times

"After reading this book, I still don’t understand what makes Miami what it is, but that’s why I love this book and that crazy town."--Jimmy Buffett, singer and songwriter

"A delightfully unbuttoned paean to ‘Babel on Biscayne Bay.’ . . . As complex, compelling, and colorful as the city it celebrates."--Kirkus

"Not only does T. D. Allman’s portrait of Miami remain, a quarter century later, as smart and funny and keenly observed as it was upon its first publication day, it is vibrantly current and astonishingly prescient. Miami resonates far beyond its immediate subject and illuminates deep truths about America’s--and, indeed, the world’s--twenty-first-century cultural and political turmoil. Not incidentally, Allman’s brilliant prose style endures as well. The book is a joy to read."--Robert Olen Butler, author of A Good Scent from a Strange Mountain

With trenchant observations and witty prose, T. D. Allman takes readers on a tour of Miami’s people, cultures, politics, and neighborhoods. This twenty-fifth anniversary edition remains a classic guide to a city teeming with money, exotic cargo, illegal drugs, and immigrants from all corners of the world.

T. D. Allman’s work has appeared in Rolling Stone, the New York Times,the Washington Post, Vanity Fair, Harper’s, Reader’s Digest, and National Geographic, among many other publications. He is the author most recently of Finding Florida: The True History of the Sunshine State.