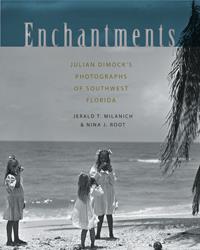 "Dimock's photographs of southwest Florida at the dawn of the twentieth century depict a subtropical Eden long ago lost through the untrammeled development of the region. Enchantments will give the reader a heightened appreciation for the beauty and uniqueness of yesterday’s Florida."--Paul S. George, author of Little Havana

"The priceless photographs in Enchantments focus on the population of southwest Florida, an eclectic mixture of Conchs, Cuban fishermen, Confederate veterans, Kentucky colonels, and tubercular Yankees."--Gary R. Mormino, author of Land of Sunshine, State of Dreams


In the first decade of the twentieth century, Julian Dimock and his father traveled throughout southwest Florida photographing the land, the people, and the waterways of this frontier Eden. The former Wall Street moguls turned gentlemen explorers published hundreds of articles documenting their journeys in Harper's, Field & Stream, and other periodicals, introducing Americans to the mysterious world of the Florida Everglades and its inhabitants. While photographer Julian was keenly interested in the isolated but culturally rich lives of the Seminole Indians, he was also drawn to the outcasts and wanderers, refugees and outlaws who had staked out hardscrabble lives far from the fledgling towns of Miami and Fort Myers.

From their base camp in the then-undeveloped outpost of Marco Island, the Dimocks trekked through the swamps and savannahs of southwest Florida as few whites had ever done. They canoed the Ten Thousand Islands, the Everglades, and Big Cypress Swamp. They traveled overland by oxcart to reach hidden places, including Deep Lake Plantation and its historic citrus grove, the tiny Henderson Creek settlement on Rookery Bay, and America's southernmost bee tree. From their houseboat they photographed Chatham Bend, the island home of the notorious killer Edgar Watson.


Shedding light on these remote and wild lands, the Dimocks inspired interest and appreciation in people who never would have known such places existed. Documenting the lives of the Seminoles who inhabited the wetlands in south Florida’s interior after the Seminole Wars, the Dimocks’ articles and photographs served as a call to protect this special area from poachers, hunters, and developers. Their historical importance is beyond question.

Enchantments presents a large selection of Julian’s photographs, accompanied by excerpts from the original magazine articles written by the Dimocks. The captions, often supplemented by the Dimocks’ firsthand observations, tell a number of stories, each a vignette about life on the southward-moving Florida frontier. These vivid duotone reproductions from original glass negatives--donated by Dimock to the American Museum of Natural History in the 1920s--preserve a rare and beautiful slice of history.

“A unique and invaluable record of Southwest Florida during the days it was one of the country’s last frontiers”
--Naplesnews.com

These beautifully luminous, historically enlightening and occasionally transcendent images truly are enchantments worth getting lost in.
--The Florida Book Review

A snapshot of life on the southward-moving Florida frontier. . . .These stunning images give a rare, beautiful glimpse into the state’s history.
--Venice Gulf Coast Living

Laboring in the Fields of the Lord: Spanish Missions and Southeastern Indians
Tacachale: Essays on the Indians of Florida and Southeastern Georgia during the Historic Period
Archaeology of Northern Florida, A.D. 200-900: The McKeithen Weeden Island Culture
Hernando de Soto and the Indians of Florida
First Encounters: Spanish Explorations in the Caribbean and the United States, 1492–1570
Florida's Indians from Ancient Times to the Present
Archaeology of Precolumbian Florida
Hidden Seminoles: Julian Dimock's Historic Florida Photographs
Archaeology of the Everglades
Florida Indians and the Invasion from Europe