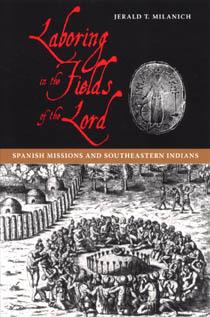 "Skillfully blends the archaeological, ethnohistorical, and historical literature … [it] should be the first book read by anybody wishing to learn more about Spanish Florida."--Journal of Social History

"A great resource for scholars. Anyone interested in the history of Spanish colonization or an introduction to the last twenty years of southeastern archaeology will appreciate this work."--The Georgia Historical Quarterly

"A swift tour of the century-old archaeology and historiography of the Florida missions . . . a lively, fast-paced, fact-filled narrative of the Southeastern missions and their Native American inhabitants."--New Mexico Historical Review

The missions of Spanish Florida are one of American history’s best kept secrets. Between 1565 and 1763, more than 150 missions with names like San Francisco and San Antonio dotted the landscape from south Florida to the Chesapeake Bay. Drawing on archaeological and historical research, much conducted in the last 25 years, Milanich offers a vivid description of these missions and the Apalachee, Guale, and Timucua Indians who lived and labored in them.
First published in 1999 by Smithsonian Institution Press, Laboring in the Fields of the Lord contends the missions were an integral part of Spain's La Florida colony, turning a potentially hostile population into an essential labor force. Indian workers grew, harvested, ground, and transported corn that helped to feed the colony. Indians also provided labor for construction projects, including the imposing stone Castillo de San Marcos that still dominates St. Augustine today.
Missions were essential to the goal of colonialism. Together, conquistadors, missionaries, and entrepreneurs went hand-in-hand to conquer the people of the Americas. Though long abandoned and destroyed, the missions are an important part of our country's heritage. This reprint edition includes a new, updated preface by the author.

Jerald T. Milanich is curator in archaeology for the Florida Museum of Natural History.

…a highly readable work and an excellent addition to the growing field of colonial Florida history.
--Southern Historian

" By tapping into a vast amount of recent historical and archeological data, Milanich, curator for the Florida Museum of Natural History, has been able to vividly reconstruct the many Franciscan and Jesuit missions in La Florida during the sixteenth and seventeenth centuries, and the story of how these missions affected and were affected by the various Indians who resided and labored in them."
--Southwestern Mission Research Center

Tacachale: Essays on the Indians of Florida and Southeastern Georgia during the Historic Period
Archaeology of Northern Florida, A.D. 200-900: The McKeithen Weeden Island Culture
Hernando de Soto and the Indians of Florida
First Encounters: Spanish Explorations in the Caribbean and the United States, 1492–1570
Florida's Indians from Ancient Times to the Present
Archaeology of Precolumbian Florida
Hidden Seminoles: Julian Dimock's Historic Florida Photographs
Enchantments: Julian Dimock’s Photographs of Southwest Florida
Archaeology of the Everglades
Florida Indians and the Invasion from Europe