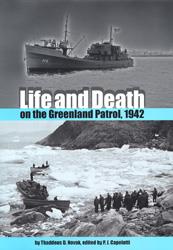 "This will become a classic for anyone wishing to know how the average military person coped with World War II. The diary abounds with the details of everyday life at sea and will preserve this aspect of maritime history that is fast being lost."--Dennis L. Noble, U.S. Coast Guard (retired) and author of The Rescue of the Gale Runner (UPF)

One of the untold stories of World War II is the guarding of Greenland and its coastal waters, where the first U.S. capture of an enemy ship took place. For six months in 1942 and against standing orders of the time, Thaddeus Nowakowski (now Novak) kept a personal diary of his service on patrol in the North Atlantic. Supplemented by photos from his last surviving shipmates, Novak’s diary fills a void in the story of American sailors at war in the North Atlantic. It is the only known diary of an enlisted Coast Guard sailor to emerge from WWII.

Though the Greenland coast was of vital importance to Allied forces, U.S. Coast Guard crews serving there were relegated to converted fishing vessels known as “wooden shoes.” Hastily commissioned in Boston to serve as escorts for supply routes to new air bases in Greenland, ten Arctic trawlers were transformed into the basis of the Greenland Patrol, transporting young men who had never been away from home into a realm of mountainous icebergs, lurking U-boats, and the alien culture of native Greenland Eskimos. This story of the Nanok’s 1942 patrol is a remarkable account of a sailor thrown into a global war in a remote area full of environmental hardships that few endured in World War II. Between the sudden excitements and mind-numbing boredom of military life, Novak records the routine details of day-to-day patrol, contacts with the native Greenlanders and their impenetrable way of life, and actions such as the loss of the cutter Natsek and its entire crew on the night of December 17,1942. Not an account of grand strategy or hand-to-hand combat, this story of a twenty-year-old petty officer on duty in the Arctic is rather the life of an ordinary individual at war, coping with rigorous hardships during a time of great crisis.

Novak’s account will be of significant value to students of the U.S. Coast Guard and of naval service in wartime. His illumination of the small details of a sailor’s life and perceptive observation of the arctic region and its little-known people will appeal to anyone interested in maritime history.

P.J. Capelotti is professor of anthropology at Penn State Abington. He is the author or editor of several books, including The Greatest Show in the Arctic: The American Exploration of Franz Josef Land, 1898–1905 (short-listed for the 2018 William Mills Prize), and Life and Death on the Greenland Patrol, 1942 (winner of the Foundation for Coast Guard History Book Award). A retired master chief, .the U.S. Coast Guard decorated him with the Arctic Service Medal and twice with the Meritorious Service Medal.

"Novak's deckplate-level log will be of significant value to maritime historians and would make an appealing movie a la The Sand Pebbles."
--Proceedings from the US Naval Institute

"A classic of its kind."
--The Northern Mariner

"Novak tells the sort of war story that rarely makes it into the history books but deserves to be remembered."
--Journal of Military History

"A marvelous glimpse into life on the Greenland Patrol through the eyes of a young, scared, lonely, non-rate."
--Foundation for Coast Guard History Website

"An excellent book presenting an important document for histories of Greenland in World War II and of the Unites States Coast Guard."
--Polar Record

"To anyone wishing to know more about World War II, this diary adds dimension to the broader context of the war in general, and the North in particular, as well as into Canadian-American wartime relations . . . No history of war is complete without the men and women who fought in the proverbial and literal trenches. Though they were often unsung heroes, they all have a story to tell, and it is important for there to be a place where their voices can be heard. Novak's contribution to the University of Florida series on "New Perspectives on Maritime History and Nautical Archaeology" is one such place."
--International Journal of Maritime History

It is a tale of misery, loneliness, and peril: while the specific instances may have been unique to Novak and his shipmates, the general experiences are universal to fighting men and women across time.
--H-Maritime

…a personal account of an ordinary man serving his country… …a fascinating window into a tiny piece of the war.
--Canadian Naval Review

…opens the door to one of the least known areas of naval warfare in World War II. Highly recommended.
--Ships Monthly

"Provides a useful background account of the necessity for military intervention around Greenland and appends informative notes about ships and persons mentioned in the main text."
--Mariner's Mirror

Adventures in Archaeology: The Wreck of the Orca II and Other Explorations