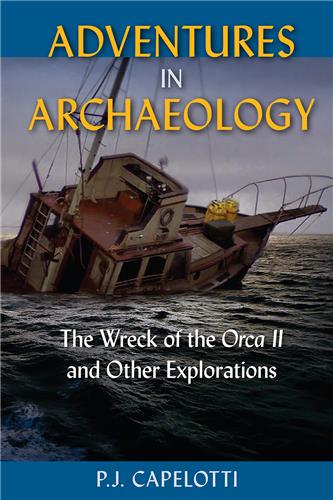 “Transcendent. A brilliant, thought-provoking exploration of the role of archaeology in understanding the recent past, this book takes the reader on a journey from the frozen north, the depths of the sea, and the vastness of the Pacific to the ends of space.”—James P. Delgado, coauthor of The Maritime Landscape of the Isthmus of Panamá

“Capelotti does for archaeology what Neil deGrasse Tyson has done for astrophysics. His clear, articulate narrative engages the reader and will inspire both current and future archaeologists. A deeply moving, personal, and professional collection.”—Beth Laura O’Leary, coauthor of The Final Mission: Preserving NASA’s Apollo Sites

Remnants of the curious and peculiar ways humankind has marked the archaeological landscape are abundant but often ignored: wrecked aircraft, abandoned airfields, old highway billboards, derelict boats, movie props, and deserted mining operations. In this book, archaeologist P.J. Capelotti explores places and things that people do not typically think of as archaeological sites and artifacts, introducing readers to the most extreme fieldwork taking place today.

Capelotti shows that even seemingly ordinary objects from the recent past hold secrets about the cultural history of humans. He investigates the site where a stunt copy of the Orca, the fishing boat used in the movie Jaws, was stripped to pieces by fans—a revelation of the ways humans relate to popular culture. He takes readers to abandoned base camps near the North Pole that are now used as destinations for Arctic tourism. Retelling the story of Thor Heyerdahl’s research expedition across the Pacific Ocean on a balsa log raft, Capelotti shows how experimental archaeology attempts to reveal cultural connections between continents. And he doesn’t stop at the limits of the planet. He discusses debris floating through outer space and equipment left behind on the surface of the moon, highlighting current efforts to preserve artifacts that exist beyond the Earth’s atmosphere.

These discarded materials, says Capelotti, help archaeologists piece together the sweeping story of human cultural expansion and exploitation. He explains how the unusual sites of shorelines, sea, air, and space represent the farthest reaches of human civilization. His enthusiasm will inspire readers to set out on their own to investigate the secret meanings of treasures hiding in plain sight.


P.J. Capelotti is professor of anthropology at Penn State Abington. He is the author or editor of several books, including The Greatest Show in the Arctic: The American Exploration of Franz Josef Land, 1898–1905 (short-listed for the 2018 William Mills Prize), and Life and Death on the Greenland Patrol, 1942 (winner of the Foundation for Coast Guard History Book Award). A retired master chief, .the U.S. Coast Guard decorated him with the Arctic Service Medal and twice with the Meritorious Service Medal.