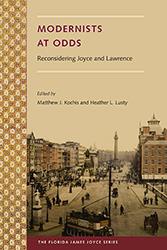 “A timely and beneficial collection. . . . Kochis and Lusty have done a superb job of collecting essays that will pave the way for future critical work that compares Lawrence and Joyce.” —James Joyce Quarterly

“Encourage[s] Joyceans and Lawrentians to talk more to each other and to explore the similarities between the two literary giants further.”—James Joyce Broadsheet

“There are a number of clever and convincing arguments about the common grounds upon which Joyce and Lawrence can be evaluated.”—English Literature in Transition

"Challenges the unhelpful polarization of Lawrence and Joyce in much twentieth-century literary criticism and offers intriguing alternatives to what is surely a reductive approach to the achievements of both writers."—Fiona Becket, author of The Complete Critical Guide to D. H. Lawrence

"A groundbreaking collection. Sexuality, censorship, publishing, and rivalry are all treated with a fresh eye; cutting-edge archival research is brought to the fore; and new perspectives such as ecocriticism are among the many highlights."—Susan Mooney, author of The Artistic Censoring of Sexuality


Modernism’s most contentious rivals, James Joyce and D. H. Lawrence, were polar opposites—stylistically, personally, and professionally—yet their lives, works, and careers bear striking similarities. They shared the same literary agent, published in the same literary magazines, fought legal battles against censorship, and were both pirated by Samuel Roth. This is the first book to explore the resonances between the two writers, shattering the historical silence between Joyceans and Lawrentians.


The parallels run deep between these epic figures of the literary canon, and this volume explores the classic modernist paradoxes shared by the two writers. Both were at once syncretists and shatterers, bourgeois cosmopolitans, prudish libertines, displaced nostalgists, and rebels against their native lands. Considering mutual themes such as gender, class, horseracing, nature, religion, exile, and modernism’s fascination with Egyptology, these essays highlight the many intersections in the major novels and short fiction of Joyce and Lawrence. Modernists at Odds is a long overdue extended comparison of two of the most compelling writers of the twentieth century.

Matthew J. Kochis is an independent scholar and former Mellon Postdoctoral Fellow of Digital Humanities at Dickinson College. Heather L. Lusty is Associate Professor-in-Residence in English at the University of Nevada, Las Vegas.

Offers something for everyone. . . . Encourage[s] Joyceans and Lawrentians to talk more to each other and to explore the simularities between the two literary giants further.
--James Joyce Broadsheet