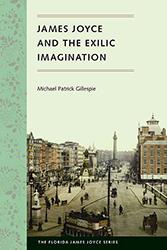 James Joyce and the Exilic Imagination

"As Gillespie combines national, geographical, and historical contexts with close readings of Joyce's works, the theme of exile takes on unexpected nuances, from spiritual displacements in Joyce's neglected play Exiles to the trials of dealing with a 'foreign' language in Finnegans Wake."--Margot Norris, editor of Dubliners

"Casts significant new light on Joyce's writings by bringing out memorable ways in which the literal experience of exile enabled Joyce to recast retrospectively the exilic quality of living in Ireland, not simply as alienation but as a mixture of rancor and affection that colors the lives in all his fiction."--John Paul Riquelme, editor of A Portrait of the Artist as a Young Man


James Joyce left Ireland in 1904 in self-imposed exile. Though he never permanently returned to Dublin, he continued to characterize the city in his prose throughout the rest of his life. This volume elucidates the ways Joyce wrote about his homeland with conflicting bitterness and affection--a common ambivalence in expatriate authors, whose time in exile tends to shape their creative approach to the world. Yet this duality has not been explored in Joyce's work until now.

The first book to read Joyce's writing through the lens of exile studies, James Joyce and the Exilic Imagination challenges the tendency of scholars to stress the writer's negative view of Ireland. Instead, it showcases the often-overlooked range of emotional attitudes imbuing Joyce’s work and produces a fuller understanding of Joyce's canon.

Michael Patrick Gillespie is professor of English at Florida International University and director of the Center for the Humanities in an Urban Environment. He is the author and editor of numerous books, including Ulysses in Critical Perspective and Foundational Essays in James Joyce Studies.

Helps to defamiliarize our current understanding of exile. . . . through its many re-readings of canonical works.
--Léirmheasanna

Provides a fresh assessment of the correlation between the exilic ethos and the modernist aesthetic. . . . A thorough exploration of how Joyce’s exilic disposition finds constant articulation in his works, suggesting important directions for future critical investigation.
--James Joyce Broadsheet

Well-written . . . will surely be helpful to Joycean novices (or “virgin readers”), and appreciated by others as a condensed reminder of how thoroughly exile influenced many of Joyce’s works.
--James Joyce Literary Supplement