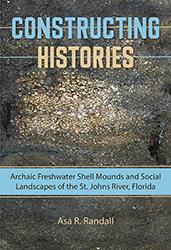 "A sophisticated application of landscape thought to a recently crafted archaeological record of the St. Johns River."-- Cheryl Claassen, author of Feasting with Shellfish in the Southern Ohio Valley: Archaic Sacred Sites and Rituals

"Changes the way archaeologists conceptualize the dynamic relationships between hunter-gatherers and cultural landscapes in Native North America. Anybody interested in hunter-gatherer societies, landscape archaeology, ancient monuments, anthropogenic environments, the archaeology and environmental history of Florida and the American South, and the history of North American archaeology should read this book."--Christopher B. Rodning, coeditor of Archaeological Studies of Gender in the Southeastern United States


Large accumulations of ancient shells on coastlines and riverbanks were long considered the result of garbage disposal during repeated food gatherings by early inhabitants of the southeastern United States. In this volume, Asa R. Randall presents the first new theoretical framework for examining such middens since Ripley Bullen's seminal work sixty years ago. He convincingly posits that these ancient "garbage dumps" were actually burial mounds, ceremonial gathering places, and often habitation spaces central to the histories and social geography of the hunter-gatherer societies who built them.

Synthesizing more than 150 years of shell mound investigations and modern remote sensing data, Randall rejects the long-standing ecological interpretation and redefines these sites as socially significant monuments that reveal previously unknown complexities about the hunter-gatherer societies of the Mount Taylor period (ca. 7400-4600 cal. B.P.). Affected by climate change and increased scales of social interaction, the region's inhabitants modified the landscape in surprising and meaningful ways. This pioneering volume presents an alternate history from which emerge rich details about the daily activities, ceremonies, and burial rituals of the archaic St. Johns River cultures.

Asa R. Randall is assistant professor of anthropology at the University of Oklahoma.

The definitive data synthesis for the region; it is also a methodological model for the reconstruction of a landscape from fragmentary evidence; finally, it is an important repudiation of the notion that hunter-gatherers lack history.
--Antiquity

One cannot escape feeling amazement that the societies constructing these monumental landscapes and histories in the first half of the Holocene were small-scale and hunter-gatherer-fisher in economic orientation....[Randall] works to dispel the notion that shell mound landscapes...in the New World represent solely or primarily food refuse.
--American Antiquity

Enlivens a period that has long been thought to be a relatively static and uneventful 2,000-year epoch as everyone was waiting for someone to invent or introduce pottery. . . . Constructing Histories is a major contribution to thearchaeology of Florida and the southeastern United States. It reflects the best kind of scholarship--one that focuses a contemporary lens on traditional data and brings a thoughtful approach to excavation.
--Florida Historical Quarterly

Randall demonstrates the landscape of the Archaic was rich with historically and socially charged landscapes that persisted into later community forms.
--Cambridge Archaeological Journal