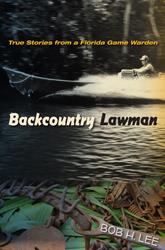 "If you enjoy outdoor adventure flavored with colorful characters and wry humor, this book is for you. Follow dedicated wildlife officers as they use their wits and skills in the pursuit of poachers and wildlife law violators."--Tom Mastin, forester and managing broker, Mossy Oak Properties Legacy Realty Services

"Lee recounts his amazing and challenging career as a Florida game warden with wit, wisdom, and careful attention to detail. You will travel with him as he boats the St. Johns River, walk beside him as he wades past resting alligators, and listen for that gunshot on a cold Putnam County night."--Jeff Hahr, former patrol supervisor, Florida Fish and Wildlife Conservation Commission


In the underbelly of Florida, hardened poachers operate in the dark, out of sight and away from residents who sleep soundly through the night. But poachers are not the only midnight hunters. In the state’s public wilderness tracts, cattle ranches, and water courses, wildlife thieves are stealthily and silently tracked.

Most people have never imagined the often dicey, comical, and sometimes bizarre job of a Florida game warden. Backcountry Lawman tells what it’s like to catch an armed poacher in the act--alone, at night, without backup or a decent radio to call for help. These stories describe the cat-and-mouse games often played between game wardens and poachers of ducks, turkeys, hogs, deer, gators, and other species. Few people realize that "monkey fishing"--electrocution of catfish--had the same outlaw mystique in the rivers of Florida as moonshining once did in the hills of Georgia and Tennessee.

With thirty years of backcountry patrol experience in Florida, Bob Lee has lived through incidents of legend, including one of the biggest environmental busts in Florida history. His fascinating memoir reveals the danger and the humor in the unsung exploits of game wardens.

Bob H. Lee spent over three decades as a water patrol officer on the St. Johns River and a land patrol lieutenant in Putnam, St. Johns, and Flagler counties. Before retiring in 2007, he taught man-tracking classes through the Florida Fish and Wildlife Conservation Commission.

"Lee takes readers from his rookie days as a Game Warden in 1997 up to his retirement in 2007 and he tells quite a story. As he relates his experiences you feel like you are sitting beside him in his 18-foot fiberglass 'Old Timer' patrol boat."
--Panama City News Herald

"Gives readers a look inside the secret tricks of the trade of both poachers and the officers that relentlessly chase them as they uphold their charge to protect Florida's wildlife."
--Woods 'n Water

"Between the flat out laughs is a glimpse into what can be a deadly job."
--St. Augustine Record

"This engrossing book is filled with stories like those of Gator, an off-duty patrol officer out killing 18 hogs in his spare time as they pass through a fence."
--Book News Inc.

"As thrilling as any Indiana Jones epic."
--Florida Times-Union

"Pure joy to read…Backcounty Lawman has something for everybody, including white-knuckle boat chases in the dark, surveillance on bird poachers, deer decoy operations, and even an entertaining, yet important, pollution case."
--International Game Warden

"A fast, fun read that anyone who has spent much time in the Florida outdoors will thoroughly enjoy…Lee is a natural story-teller and has a novelist’s eye for the telling detail, the smells and sounds and sights of the woods, rivers, and lakes of northeast Florida."
--The Fishing Wire

"An entertaining, enlightening and occasionally hilarious read."
--The Outdoor Wire

"Lee’s stories highlight the dangers and humor of hunting down these illegal hunters...an interesting and entertaining read."
--Robert E. Hoopes

"Takes readers to the wetlands and pine woods of north Florida where poachers and lawmen played a cat-and-mouse game under the stars and around the dangerous reptiles lurking beneath the water’s surface."
--Starke Journal

"Provides an inside look at the sometimes amusing and sometimes scary things game wardens must do to catch fish and wildlife law violators."
--South Florida Sun-Sentinel