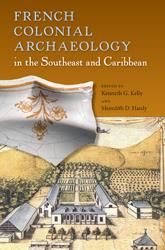 French Colonial Archaeology in the Southeast and Caribbean

"The French in the Western Hemisphere are best known from their activities in Canada and the Great Lakes. This book provides insights into their interactions with their English and Spanish rivals south of the border."--Charles Ewen, East Carolina University

"The first collection of broadly multiregional and multidisciplinary archaeological studies addressing the French colonial experience in the southern United States and the Caribbean. The contributions reveal the diverse ways in which French colonists, African slaves, and Native Americans adjusted to new colonial realities through studies of material culture, landscape, architecture, diet, and bioarchaeology. Important source material for all students of the American colonial period."--Kathleen Deagan, Florida Museum of Natural History

This innovative collection of essays brings together archaeological research on French colonial sites from Maryland, South Carolina, the Gulf Coast and Lower Mississippi Valley, the Caribbean, and French Guiana to explore the nature of French colonization. Specific contributions explore foodways, ceramics, plantations, architecture, and colonial interactions with Africans and Native Americans, all with an eye to what makes the French colonial endeavor distinct from better-known British or Spanish experience.

Crosscutting the volume are such questions as, how are "French" sites different from those of other nationalities, what is the nature of French colonization, how can archaeology help identify particularly national histories in a given colonial setting, and how was French identity materialized and maintained in the New World?

Kenneth G. Kelly is professor of anthropology at the University of South Carolina, where he teaches historical archaeology and African archaeology. Meredith D. Hardy is an archaeologist with the National Park Service-Southeast Archeological Center.

"The relics of colonialism still lurk about modern culture. The archeology in question is both literal and metaphorical, and proves to be an interesing dig of cultural, religious, architectural, culinary, and many other influences and how they contrast through our world. French Colonial Archaeology in the Southeast and Caribbean is a fine pick, much recommended for history, archaeology, and anthropology collections."
--The Midwest Book Review

"While the French colonial experience in Canada and the Great Lakes is well known, the French presence (which was extensive) in the American Southeast and Caribbean is not. The volume leaves no doubt that the French experience was significantly different from that of other Europeans. Demonstrates that French colonial archaeology of the region is full of possibilities that are begging for research. It is important source material that should lead to significant new investigations and discoveries."
--American Archaeology

“Books like this offering diverse views of its grand geographic scope will be useful for historians of the French New World as well as for curators and archivists of regional museums.”
--Winterthur Portfolio

Kelly and Hardy have done a fine job of assembling these contributions into a useful book related to the archaeology of French sites, and French Colonial Archaeology in the Southeast and Caribbean is a book which may be highly recommended.
--Caribbean Quarterly

French Colonial Archaeology in the Southeast and Caribbean, edited by Kenneth G. Kelly and Meredith D Hardy provides a fascinating introduction to an often overlooked yet still integral part of the history of the New World.
--Southeastern Archaeology

Dramatically increases our understanding of the colonial circum-Caribbean area by exploring the contribution of France and French colonists in the development of the region….An important addition to the body of literature of the colonial-period archaeology.
--New West Indian Guide