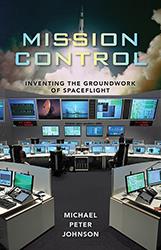 "We have all seen NASA's mission control centers at moments of both triumph and tragedy. Johnson makes a significant contribution to spaceflight history by analyzing their pivotal role."--Roger Launius, associate director for collections and curatorial affairs, National Air and Space Museum

"Addresses a critical yet neglected topic in the history of space exploration, namely the role of mission controllers on the ground, without whom little could have ever been accomplished in space."--Paul E. Ceruzzi, author of Computing: A Concise History

"Mission control centers are where the action happens in spaceflight. This book looks at three important centers, comparing them to each other and revealing their similarities and differences."--David Christopher Arnold, author of Spying from Space: Constructing America’s Satellite Command and Control Systems


Brave astronauts, flaring rockets, and majestic launches are only one side of the story of spaceflight. Any mission to space depends on years--if not decades--of work by thousands of dedicated individuals on the ground. These are the people whose voices offer a friendly link to Earth in the void of space, whose hands maneuver rovers across the face of planets, and whose skills guide astronauts home. This book is a long-overdue history of three major centers that have managed important missions since the dawn of the space age.

In Mission Control, Michael Johnson explores the famous Johnson Space Center in Houston, the Jet Propulsion Laboratory in Pasadena, and the European Space Operations Centre in Darmstadt, Germany--each a strategically designed micro-environment responsible for the operation of spacecraft and the safety of passengers. He explains the motivations behind the location of each center and their intricate design. He shows how the robotic spaceflight missions overseen in Pasadena and Darmstadt set these centers apart from Houston, and compares the tracking networks used for different types of spacecraft.

Johnson argues that the type of spacecraft and the missions they controlled--not the nations they represented--defined how the centers developed, yet these centers ended up playing vital national roles as space technology became a battleground for international power struggles in the Cold War years and even after. The most visible part of a conflict that was just as real as the wars in Korea, Vietnam, and Afghanistan and caused great global anxiety, mission control centers have served as symbols of national security in the public eye and pivotal links in the history of modern technology.

Detail[s] each center’s history from its groundbreaking and report[s] details down to the color of the carpets and the length (in miles) of wire running through the computer terminals.
--Air & Space Smithsonian Magazine