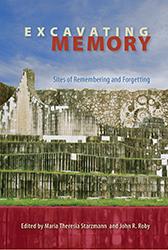 "A rounded overview of historical and sociocultural approaches to memory that offers a series of interesting and compelling case studies with good global coverage."--Andrew Jones, author of Prehistoric Materialities

"Contests constructions of collective memory, the political uses of memory, and the sensory and mnemonic roles played by materials in this process. Excavating Memory is as provocative and disturbing as it is useful and inspiring. A must-read for memory scholars of all stripes and persuasions."--Ruth M. Van Dyke, coeditor of Archaeologies of Memory


The creation of memory often involves a clash between the established official narrative and insurgent histories. In this compelling collection, Maria Theresia Starzmann and John Roby bring together an international cast of experts who move beyond the traditional framework of the "constructed past" to look at not only who remembers the past but also how it is remembered. They convincingly argue that memory is a complex process, shaped by remembering and forgetting, inscription and erasure, presence and absence. Collective memory influences which stories are told over others, ultimately shaping narratives about identity, family, and culture.

This interdisciplinary volume--melding anthropology, archaeology, sociology, history, philosophy, literature, and archival studies--explores such diverse arenas as archaeological objects, human remains, colonial landscapes, public protests, national memorials, art installations, testimonies, and even digital space as places of memory. The writers show how the materiality of specific locations features centrally in the production of memories and counter-memories, revealing the conflicts surrounding marginalized, underprivileged, and silenced stories. Examining important sites of memory, including the Victory Memorial to the Soviet Army, Blair Mountain, Spanish penitentiaries, African shrines, and the U.S.-Mexico borderlands, the contributors highlight the myriad ways communities reinforce or reinterpret their pasts. In doing so, they demonstrate the political relevance of analyses of social memory to community archaeology, public history, heritage studies, and education.

Maria Theresia Starzmann is assistant professor of anthropology at McGill University. John R. Roby is an independent scholar and journalist based in upstate New York.

Trauma, violence, erasure, damage, abuse and destruction. The contributors engage deeply with memory and its social and political significance in order to reveal these injustices, swept under the carpet by official narratives, and to highlight the insurgent histories fighting back.
--Antiquity