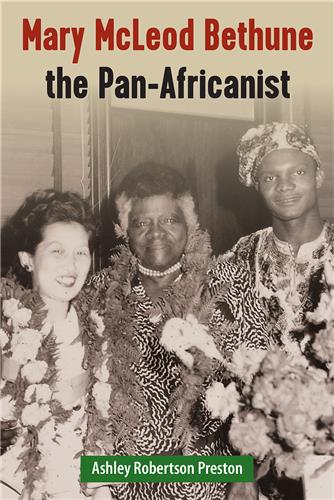 “Preston’s original treatment of Mary McLeod Bethune as an international figure greatly expands the extant narrative. This exciting book not only substantiates current attention on Bethune as a major public figure, but also situates her in the geographic context of Cuba, Haiti, the Bahamas, and Liberia—moving beyond her impact in the United States.”—Stephanie Y. Evans, author of Black Women in the Ivory Tower, 1850?1954: An Intellectual History

“Adds depth and nuance to our understanding of a significant educator and organizer of the twentieth century while also expanding the historical narrative of Pan Africanism to consider the role of women like Mrs. Bethune as being central to this international activism.”— Lindsey Swindall, author of The Path to the Greater, Freer, Truer World: Southern Civil Rights and Anticolonialism, 1937–1955

This book examines the pan-Africanism of Mary McLeod Bethune through her work, which internationalized the scope of Black women’s organizations to create solidarity among Africans throughout the diaspora. Broadening the familiar view of Bethune as an advocate for racial and gender equality within the United States, Ashley Preston argues that Bethune consistently sought to unify African descendants around the world with her writings, through travel, and as an advisor.

Preston shows how Bethune’s early involvement with Black women’s organizations created personal connections across Cuba, Haiti, India, and Africa and shaped her global vision. Bethune founded and led the National Council of Negro Women, which strengthened coalitions with women across the diaspora to address issues in their local communities. Bethune served as director of the Division of Negro Affairs for the Franklin D. Roosevelt administration, and later as associate consultant for the United Nations alongside W.E.B. DuBois and Walter White, using her influence to address diversity in the military, decolonization, suffrage, and imperialism. Mary McLeod Bethune the Pan-Africanist provides a fuller, more accurate understanding of Bethune’s work, illustrating the perspective and activism behind Bethune’s much-quoted words: “For I am my mother’s daughter, and the drums of Africa still beat in my heart.”

The Varieties of Women's Experiences