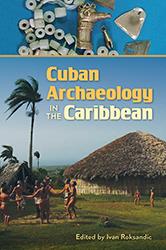 Cuban Archaeology in the Caribbean

“This important and timely collection of essays greatly expands our knowledge of the human settlement of Cuba and the activities of its indigenous peoples. . . . A must read.”—Society for Historical Archaeology

"Changes the conversation about Cuban archaeology as a whole, presenting groundbreaking data and interpretations that will be useful for prehistoric and historical archaeologists working the region."—Samuel M. Wilson, author of The Archaeology of the Caribbean

"Presents a collection of essays that will tremendously facilitate the linkage of issues in Cuban archaeology with the rest of the Caribbean and surrounding areas."—Peter E. Siegel, coeditor of Protecting Heritage in the Caribbean


As the largest—and most centrally located—island of the Caribbean, Cuba has seen successive waves of migration to its shores. Its early colonization, and that of the Greater Antilles, is complicated by population movements within the Circum-Caribbean. In this volume, Ivan Roksandic and an international team of researchers present a new theory of mainland migration into the Caribbean.

Through analysis of early agriculture, burial customs, dental modification, pottery production, and dietary patterns, the contributors enable a very close look at the lifeways and challenges of the native populations. They decipher patterns of movement between the islands and present-day Mexico and Central America and explore the interactions between the islands’ inhabitants, including the fate of indigenous groups after European contact. Together the essays produce a view of the early Caribbean that is rich with dynamic networks of exchange and matrixes of cultural influences, more intricate and multilinear than previously believed.

With contributions from archaeology, physical anthropology, environmental archaeology, paleobotany, linguistics, and ethnohistory, this volume adds to ongoing debates concerning migration and colonization. It examines the importance of landscape and seascape in shaping human experience; the role that contact and interaction between different groups play in building identity; and the contribution of native groups to the biological and cultural identity of postcontact and modern societies.
Ivan Roksandic, assistant professor in the Department of Anthropology and coordinator of the Interdisciplinary Linguistics Program at the University of Winnipeg, is the author of The Ouroboros Seizes Its Tale: Strategies of Mythopoeia in Narrative Fiction.

A volume in the Florida Museum of Natural History: Ripley P. Bullen Series

Provide[s] a framework for new, multi-disciplined research on the first Cubans and their brethren in the Caribbean. Clearly these people were more diverse and much more connected than previously thought.
--American Archaeology