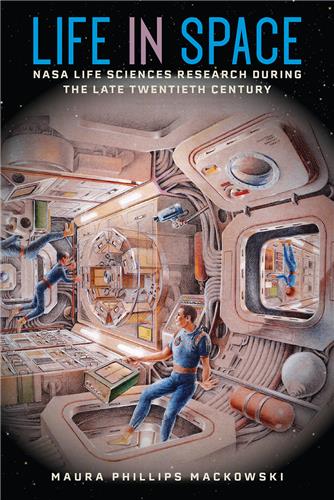 
A little-known yet critical part of NASA history

“A groundbreaking work. . . . Mackowski opens a world of life science investigation few others than the most ardent space aficionados understand. The sum total is a strong explanation of one of the fundamental issues to be mastered in any effort to move beyond this planet, preserving life of humans and other creatures in the exceptionally hostile environment beyond Earth.”—Quest: The History of Spaceflight Quarterly

“Sheds new light on how one of NASA’s significant research efforts succeeded in breaking new ground even as those efforts struggled to find support both within and outside the agency. Offers a clear-eyed analysis of a highly complex and multipart institution drawn from close primary research and interviews with participants.”—Margaret A. Weitekamp, curator and chair of the Space History Department, Smithsonian National Air and Space Museum

“Mackowski’s research is exhaustive, her analysis is spot-on, and her conclusions give us pause as we consider when and if to send our fellow humans deeper into space on longer missions with greater risk and less support from Mission Control than ever before.”—John B. Charles, retired chief scientist, NASA’s Human Research Program

Life in Space explores the many aspects and outcomes of NASA’s research in life sciences, a little-understood endeavor that has often been overlooked in histories of the space agency. Maura Mackowski details NASA’s work in this field from spectacular promises made during the Reagan era to the major new directions set by George W. Bush’s Vision for Space Exploration in the early twenty-first century.

At the first flight of NASA’s space shuttle in 1981, hopes ran high for the shuttle program to achieve its potential of regularly transporting humans, cargo, and scientific experiments between Earth and the International Space Station. Mackowski describes different programs, projects, and policies initiated across NASA centers and headquarters in the following decades to advance research into human safety and habitation, plant and animal biology, and commercial biomaterials. Mackowski illuminates these ventures in fascinating detail by drawing on rare archival sources, oral histories, interviews, and site visits.

While highlighting significant achievements and innovations such as space radiation research and the Neurolab Spacelab Mission, Mackowski reveals frustrations—lost opportunities, stagnation, and dead ends—stemming from frequent changes in presidential administrations and policies. For today’s dreams of lunar outposts or long-term spaceflight to become reality, Mackowski argues, a robust program in space life sciences is essential, and the history in this book offers lessons to help prevent leaving more expectations unfulfilled.

Maura Phillips Mackowski, a research historian based in Arizona, is the author of Testing the Limits: Aviation Medicine and the Origins of Manned Space Flight.