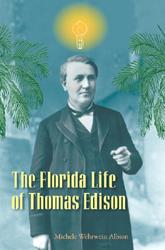 The Florida Life of Thomas Edison

Spend time with some of Florida's most famous snowbirds

"Far from being mere tourists, the Edisons were longtime and active members of the Fort Myers community. Albion richly details his life in Florida, enriching our understanding of his relationship with people outside of his labs. Always sensitive to Edison as a human being, she reveals how his time in Fort Myers was increasingly central to Edison's life."--Howard Segal, author of Recasting the Machine Age: Henry Ford's Village Industries

"Fills a significant gap in the inventor's career by using local sources as well as the extensive collection of the Edison Papers to tell the story of his work, recreation, and influence in the city where he built his winter home."--Paul Israel, author of Edison: A Life of Invention

"Albion paints a highly personal portrait of daily activities in the Edison home, including tarpon fishing, Model T expeditions into the Everglades, research with tropical plants, and a visit by the President of the United States."--Thomas Graham, author of Flagler's St. Augustine Hotels

"Albion, former curator of the Edison and Ford Winter Estates, writes with an eye for extraordinary as well as ordinary details, from the difficult task of lighting Fort Myers in the late 1880's to family expeditions up the Caloosahatchee River and into the Everglades."
--PublishersWeekly

"Succeeds as a rich and interesting portrayal of Thomas and Mina Edison's work, recreation, and community activism in the Sunshine State."
--The Florida Historical Quarterly

"In The Florida Life of Thomas Edison, what seems like a tiny, obscure topic that would only prove interesting to utterly unapologetic history nerds turns out to be a quirky, fun, sprawling portrait of late 19th and early 20th centure life."
--Fosters.com