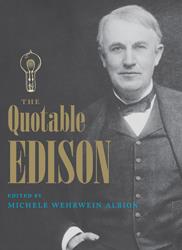 "Edison dispensed his opinions on every topic from microbes to the meaning of life."--Thomas Graham, author of Flagler’s St. Augustine Hotels

"Michele Albion gives us a treat by carefully peeling back time and history to expose Thomas Edison’s complex, and beautiful natural wood grain. You will laugh, ponder, and ruminate about the great man and his views; and his observations about life, technology and the future. It certainly is an interesting read."--John P. Keegan, president and chair of the Charles Edison Fund, Edison Innovation Foundation

"In times when the phrase techno-wizard means the latest Web sensation, the greatest wizard of them all comes to life again in this collection."--Joy Wallace Dickinson, author of Remembering Orlando

Thomas Edison was the "Wizard of Menlo Park." A prolific inventor and holder of numerous patents, he was also called a "magician," "the Napoleon of Science," and the "Inventor of the Age." But he was also a practical joker, a self-made man with a certain disdain for polite society, an ambitious explorer, and a public intellectual.

The Quotable Edison offers a wealth of his insightful, enlightening, and sometimes humorous comments and witticisms on a wide range of subjects, from business to politics, from religion to nutrition, from advice to boys to opinions on women’s clothing.

Famous for his dictum that "Genius is one percent inspiration, ninety-nine percent perspiration," Edison offered many other gems.

- On religion, "Satan is the scarecrow of the religious cornfield."
- On the English, "The English are not an inventive people; they don’t eat enough pie."
- On work and business, "I’ve been working two shifts most of my life. Lots of other men work two shifts too, but [they] devote the other one to poker."
- On the law, "A lawsuit is the suicide of time."

And his reported final words: "It’s very beautiful over there. "

Michele Wehrwein Albion, curator of the Edison and Ford Winter Estates from 1992 to 1997 and former curatorial staff at the United States Holocaust Museum, is the author of The Florida Life of Thomas Edison. She lives in Dover, New Hampshire.

Thomas Edison was a brilliant man, and while controversy has been called for his inventive knowledge, his wit and slyness as a businessman and thinker cannot be questioned. A celebrity of his day, his sharp tongue resonates strongly. A must for anyone who enjoys reading about one of the sharpest minds in history.
--The Midwest Book Review

The Florida Life of Thomas Edison
The Quotable Eleanor Roosevelt