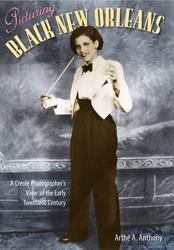 "Collins was a feisty, ambitious Creole woman in twentieth-century New Orleans who overcame the barriers society and the law put in her way. She meant to be successful on her own terms and she was."--Patricia Brady

"A welcome addition to the study of vernacular photography. Anthony reveals how this remarkable woman marked her place in a 'man's world.' Picturing Black New Orleans will have an impact on the history of photography and the city of New Orleans, particularly the Tremé neighborhood. This book is a revelation."--Deborah Willis

Florestine Perrault Collins (1895-1988) lived a fascinating and singular life. She came from a Creole family that had known privileges before the Civil War, privileges that largely disappeared in the Jim Crow South. She learned photographic techniques while passing for white. She opened her first studio in her home, and later moved her business to New Orleans’s black business district. Fiercely independent, she ignored convention by moving out of her parents’ house before marriage and, later, by divorcing her first husband.
Between 1920 and 1949, Collins documented African American life, capturing images of graduations, communions, and recitals, and allowing her subjects to help craft their images. She supported herself and her family throughout the Great Depression and in the process created an enduring pictorial record of her particular time and place. Collins left behind a visual legacy that taps into the social and cultural history of New Orleans and the South.
It is this legacy that Arthé Anthony, Collins's great-niece, explores in Picturing Black New Orleans. Anthony blends Collins's story with those of the individuals she photographed, documenting the profound changes in the lives of Louisiana Creoles and African Americans. Balancing art, social theory, and history and drawing from family records, oral histories, and photographs rescued from New Orleans in the wake of Hurricane Katrina, Anthony gives us a rich look at the cultural landscape of New Orleans nearly a century ago.

Arthé A. Anthony is professor of American studies at Occidental College.

Anthony delivers a warm and detailed portrait of Collins and some facets of New Orleans' rich and richly complicated culture in the early 20th century.
--Gambit: New Orleans News and Entertainment

Readers will appreciate amusing and emotional anecdotes while also gaining a strong sense of what New Orleans was like in those 20th-century decades for Creoles and others of African heritage.
--Library Journal Reviews

A well-researched account of a woman who documented a part of New Orleans that was seldom seen as worthy of notice.
--Pasadenasun

As documented and examined in Arthé A. Anthony’s fascinating new book...displayed both a remarkable, subtly sensual aesthetic and also... engaged in a stealthy for of defiance to racial bigotry.
--LA Weekly

Readers will appreciate amusing and emotional anecdotes while also gaining a strong sense of what New Orleans was like in those 20th-century decades for Creoles and others of African heritage.
--Library Journal

A fascinating mix of memoir and family history that brings to light the challenges of being a black woman photographer during the turn of the 20th century…illustrates a Creole woman’s desire to contribute her art to the broader black arts movement during the early twentieth century and depict her surrounding community with dignity and care.
--Journal of American Ethnic History

Readers wanting to know more about the history of photography, Creole culture in New Orleans, or issues of race and gender in the early twentieth century will find much of interest in this work.
--The Journal of Southern History