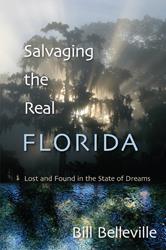 A ramble through the wild backyard of Florida

"Bill Belleville writes gorgeously and straight from the heart."--Carl Hiaasen, reviewing Losing It All to Sprawl

"Get off the interstate, cast a cold eye on the strip mall, eschew the theme park, and come with Bill Belleville to the green heart of the real Florida. He takes you to the secret places in the deep woods, the holy swamps, the springs blue as a sapphire and cold as a January midnight. He is our William Bartram, the poet of Florida's fragile beauty, a passionate, intelligent chronicler of our disappearing wonders."--Diane Roberts, author of Dream State

"If Bill Belleville were a quilt maker, this book would be his finest spread. It is a mosaic, in fact; a series of essays, each a snapshot of Florida. But pieced together, the collage becomes a kaleidoscopic rendering of our remarkable peninsula. And underlying the whole fabric is a fine batting of philosophy: we are reminded of our spiritual links to such a place, and our obligations to keep it whole."--Archie Carr III, conservationist and author

"Bill Belleville has earned the respect of just about everyone who cares about the Florida environment and Salvaging can only confirm his reputation. It's a little repast of little essays, replete with delicious revelations, such as the color of apple snail eggs (pink) and what sorts of organisms will grow on a sunken refrigerator (read the book). But it's much more than that. Spend some time with Belleville and he'll show you how much beauty there still is in our flowered state and how much, deeply much, it's worth saving."--Lola Haskins, poet and author of Still, the Mountain

Modern life has a tendency to trap people in cubicles, cars, and cookie-cutter suburbs. Thankfully, someone comes along now and then to remind us of the beauty that presents itself when we turn off the information feeds and turn away from the daily grind.

Bill Belleville’s enchanting Salvaging the Real Florida invites readers to rediscover treasures hidden in plain sight. Join Belleville as he paddles a glowing lagoon, slogs through a swamp, explores a spring cave, dives a "literary" shipwreck, and pays a visit to the colorful historic district of an old riverboat town. Journey with him in search of the apple snail, the black bear, a rare cave-dwelling shrimp, and more. Everywhere he goes, Belleville finds beauty, intrigue, and, more often than not, a legacy in peril.

Following in the tradition of John Muir, William Bartram, and Henry David Thoreau, Belleville forges intimate connections with his surroundings. Like the works of Marjory Stoneman Douglas and Archie Carr, his evocative stories carry an urgent and important call to preserve what is left of the natural world.

Bill Belleville is a veteran author and documentary filmmaker specializing in environmental issues. His books include the critically acclaimed Losing It All to Sprawl: How Progress Ate My Cracker Landscape and River of Lakes: A Journey on Florida’s St. Johns River.

"[Belleville's] essays in the new Salvaging the Real Florida are an immensely readable introduction to his conservation philosophy and respect for nature."
--Orlando Sentinel

"Salvaging is the kind of book that will enthrall devotees of Henry David Thoreau and Ed Abbey. Reading [it] is a bit like going on a field trip with your favorite science teacher: fun because you get to be outside and get your hands dirty, and wholesome because, despite your best efforts, you end up learning something. . . . It's impossible not to soak up Belleville's concern for a sustainable, healthy environment. . . . In appreciating natural places, we become better observers, Belleville says, and his essays are a relaxed study in observation."
--Orlando Weekly

"There's still enough real Florida left in Florida to wow even the most attention-addled imagination. All it takes are a few left turns. Just ask Bill Belleville, who's gotten off on more unnamed exits than anyone I've come upon in quite some time. In his delightfully meandering Salvaging the Real Florida, Belleville will not only tell ya which turns to take, he'll let you know what goes down once you get [there]. And trust me, once you've gotten a gander at Belleville's Real Florida you will wanna be hitting the low road--or at least a wild waterway. Taking a page from ol' Henry David Thoreau . . . Belleville begins his sauntering series of journeys by explaining just what sauntering really meant to the infamous Transcendentalist. Belleville is encouraging us to adapt 'a behavior that sets you squarely in the moment.' And to 'retrieve the real Florida from those who would turn the Land of Flowers into one giant, giddy corporate amusement park.' Most remarkably perhaps is that no matter where Belleville goes, he sinks into what he calls 'gator time,' and he achieves a oneness with the world that would surely please a saunterer such as Thoreau. That Belleville does so with a naturalist's eye and a historian's attention to detail only makes this rich appreciation of a largely forgotten Florida all the more rewarding."
--Miami SunPost Weekly

"In Salvaging the Real Florida essayist Bill Belleville saunters through pine and palmetto country, fins deep down into artesian springs, visits shipwrecks off Key Largo, and kayaks through the densest gator populations in Florida. He treks off the map and close to home, seeking not only 'the real Florida,' but a 'chance to rediscover [him]self--the chance to be found.' . . . This is a smart, knowing collection that sheds light on Florida's lesser known natural wonders. Belleville takes the reader to places that most people figure are already gone. He reminds us that all is not lost; there are places worth being found. We only have to know where and how to look."
--Florida Book Review

"People who spend their lives marching in the parade of progress need passionate artists like Bill Belleville to help us see---or see again---the natural world. Not just see it, but to feel and respect it . . . to blend into it, to merge our souls into a wilderness landscape. . . . I love pondering with him the untamed yet harmonious and efficient compositions of nature. I revel in his respect for those who have made their mastery of language a vehicle for Salvaging the Real Florida, and I revel in his own spectacular gifts of expression--especially his ability to conjure the quietly epiphanic close."
--Naples Florida Weekly

"Belleville is the sort of guy that you'd want as a companion on an outdoor trip. . . . HIs writing is an absolute pleasure to read. This collection of essays, full of hidden gems and wonderful insights, never disappoints."
--National Outdoor Book Awards (Winner, Natural History Literature)

"Reaffirms that [Belleville's] poetic work belongs with a class of Florida writers that includes Al Burt (too often forgotten), Archie Carr, Marjory Stoneman Douglas, Marjorie Kinnan Rawlings, Sidney Lanier, Harriet Beecher Stowe, and William Bartram. . . . He still turns a cold eye on the trampling, gouging, lacerating, scorching, mauling, draining, and eradicating that lies behind a perverted notion of progress. But he does not allow the conceit to get him down as he crisscrosses the state in search of the 'real Florida,' an expression Marjorie Kinnan Rawlings usd more than six decades ago to distinguish to indigenous landscape from the developed."
--Jack Davis, Tampa Bay History

"For Belleville, natural Florida is not just the setting from human interaction, it is a real character in his story of the state's thread of life." … "An important book for students of Florida history, but more significantly, for Floridians in general."
--Florida Historical Quarterly

Losing It All to Sprawl: How Progress Ate My Cracker Landscape
The Peace of Blue: Water Journeys