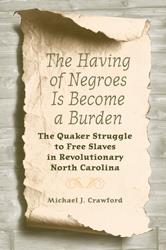 "Adds an important sharpness to a cloudily understood aspect of American history. Crawford helps bring Quaker history into the mainstream of a larger context, providing a compelling narrative of a region, a community, and a fascinating individual."--Emma J. Lapansky-Werner, Haverford College

"A thorough and often extraordinarily eloquent collection of documents from the struggle over emancipation and African-American freedom in the age of revolution."--Jon F. Sensbach, author of Rebecca's Revival

Michael Crawford presents the compelling story of colonial manumission movements among North Carolina Quakers in this illuminating volume. Embedding complete primary documents within the context of his own interpretive analysis, Crawford effectively shows how the consequences of this group's antislavery activism radiated out from a few individuals to the region, the state, and, eventually, the nation.

Students and scholars will be able to draw their own insights from the important documents presented in The Having of Negroes Is Become a Burden, many of them obscure or recently discovered. Through diaries, petitions, legislative debates, and letters, well-known as well as unknown players in the struggle for manumission are allowed to tell their own stories in their own words. This approach has the effect of highlighting the personal motivation of figures both prominent and obscure in the movement.

Michael Crawford is senior historian of the Naval History and Heritage Command. He is the author of thirteen books, including Seasons of Grace: Colonial New England's Revival Tradition in Its British Context.

"Crawford's contribution is to make use of hitherto unknown diaries and letters of George Walton (died 1789), a Quaker convert who accounts of dreams and conversations with fellow Quakers provide an almost unique resource."
--CHOICE, vol. 48 no.7

"Crawford's fine introduction and annotated documents offer detailed evidence of the varied efforts made by eastern North Carolina Friends to fight these laws. He makes clear the toll of trying to pursue one's principles (in the case of Quakers) or pursue one's freedom (in the case of African Americans) within the repressive legal climate of late-eighteenth century North Carolina--and indeed the United States."
--The Journal of American History

"The Having of Negroes is Becoming a Burden is remarkable in various respects and thus complements the existing scholarly literature on the antisalvery movement because it deals with a period, a place, and with people often ignored. It examines antislavery Quakerism in salveholding North Carolina, and it allows the reader to become acquainted with antislavery active individuals other than the outstanding and well-known ones, especially George Walton. An illuminating book that addresses a large audience thanks to its clarity. It makes interesting reading not only for the people interested in the history of the manumission movement but also for those interested in the antislavery movement. Crawford's book will allow students as well as scholars to perfect their knowledge on antislavery Quakerism in the United States."
--Southern Historian, XXXIII