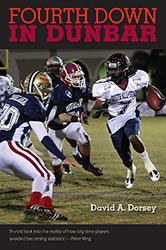 Fourth Down in Dunbar

"Rarely have we gotten such a vivid look into the reality of how big-time players avoided becoming statistics and got to be great football players and life survivors instead."--Peter King, Sports Illustrated

"Dorsey tackles the story of his adopted community with an ideal balance of reverence and objectivity."--Billy Corben, director, Cocaine Cowboys and ESPN’s The U

"A moving meditation on hope and despair, wealth and poverty, dreams and reality, a book that answers the worthwhile question: how could one troubled American neighborhood produce so many NFL players?"--Steve Rushin, Sports Illustrated

"Dorsey takes us behind those Friday Night Lights, getting inside the hearts and homes of high school football legends who rise, and sometimes fall, in their quest for NFL fame and fortune."--Dan Shaughnessy, Boston Globe

"A story that is purely, wonderfully, tragically American. The theme is football, but the threads Dorsey pursues demand a larger stage."--Randy Wayne White, author of the Doc Ford novels


For the young men of Dunbar--the low-income, historically segregated neighborhoods of Fort Myers, Florida--avoiding the path that leads to easy money as a drug dealer often means choosing complete devotion to football and dreams of NFL stardom. While such dreams remain out of reach for most, an astonishing number of Dunbar athletes, including NFL idols Deion Sanders, Jevon Kearse, and Earnest Graham, have achieved massive success.

Fourth Down in Dunbar is the story of how one community, plagued by drugs and violence, where many children are fatherless, gave rise to so many stellar youth athletes. Using Sanders as the centerpiece of the story, David Dorsey explores Dunbar’s history to show how the same drug culture that ruined so many promising futures also served as motivation for football success. As a reporter for the Fort Myers News-Press, Dorsey had exclusive access to the players and their relatives. He shows the success of the wildly talented as well as the regrets of those who took the wrong path, while highlighting hope for the future of Dunbar.

In this poignant tale of heartbreak and triumph, Dorsey reveals the true nature of these men who overcame the obstacles in their lives and made their families and their hometown proud.

David A. Dorsey is a writer for the Fort Myers News-Press. He also has written for the Kansas City Star and USA Today.

This is an important book and David did a terrific job. It’s the perfect documentation of a talent-rich community that seems to be in a never-ending circle of drugs, violence and poverty, and of how the choices kids make can affect their whole lives. I highly recommend it for football fans, counselors, youth coaches… parents and athletes everywhere.
--Who's No. 1? (blog)

David Dorsey offers a deeper look at the relationship among football, felons and Fort Meyers.
--The Washington Times

It’s a 200-page chunk of the American Dream.
--Florida Weekly

Offers a sociological study of the type of urban crisis growing rapidly in this country.
--Bulletin: The Magazine of Choate Rosemary Hall

[A] probing history of a poor, drug-riddled Florida neighborhood that cranks out NFLers, from Prime Time to Sammy Watkins.
--Sports Illustrated

Bravely tackl[es] difficult and sensitive issues of race and economic disparity. Fourth Down in Dunbar provides important reminders that, when the true opponent is found on the streets rather than across the line of scrimmage, sport in American society is about so much more than the scoreboard. Young lives, not wins and losses, hang in the balance.
--Kansas Alumni