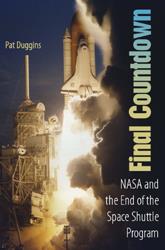 Final Countdown
NASA and the End of the Space Shuttle Program

"Final Countdown artfully merges excellent reporting with great writing to chronicle the highs and lows of the Space Shuttle program, along with rare astronaut anecdotes about what it's really like to fly to space and back."--Craig Covault, senior editor of Aviation Week & Space Technology

"Final Countdown provides a very personal look at America's manned space program from a veteran reporter who has covered the shuttle's ups and downs for more than 20 years. Duggins brings an insider's perspective to a complex topic."--Bill Harwood, CBS Space Correspondent

"Final Countdown is a refreshingly candid look at the U.S. space program at this crucial juncture. Pat Duggins' enthusiasm for space flight enhances his ability to explore tough questions about NASA's ability to plan for its next giant leap."--David Brancaccio, Host, NOW on PBS

The Space Shuttle was once the cornerstone of the U.S. space program. However, each new flight brings us one step closer to the retirement of the shuttle in 2010. Final Countdown is the riveting history of NASA's Space Shuttle program, its missions, and its impending demise. It also examines the plans and early development of the space agency’s next major effort: the Orion Crew Exploration Capsule.

Journalist Pat Duggins, National Public Radio's resident "space expert," chronicles the planning stages of the shuttle program in the early 1970s, the thrills of the first flight in 1981, construction of the International Space Station in the 1990s, and the decision in the early 2000s to shut it down.

As a rookie reporter visiting the Kennedy Space Center hangar to view the Challenger wreckage, Duggins was in a unique position to offer a poignant eyewitness account of NASA's first shuttle disaster. In Final Countdown, he recounts the agency's struggle to rebound after the Challenger and Columbia tragedies, and explores how politics, scientific entrepreneurship, and the human drive for exploration have impacted the program in sometimes unexpected ways.

Duggins has covered eighty-six shuttle missions, and his twenty-year working relationship with NASA has given him unprecedented access to personnel. Many spoke openly and frankly with him, including veteran astronaut John Young, who discusses the travails to get the shuttle program off the ground. Young's crewmate, astronaut Bob Crippen, reveals the frustration and loss he felt when his first opportunity to go into space on the first planned space station was taken away.

As the shuttle program winds down, more astronauts may face similar disappointments. Final Countdown is a story of lost dreams, new hopes, and the ongoing conquest of space.

…well written and has many human-interest stories embedded in most of the chapters; these add color to the technical and historical material. This book should appeal to the general reader interested in the space program and space exploration and to undergraduate students.
--Choice