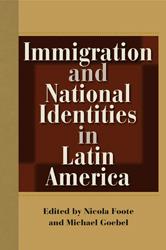 
"This groundbreaking study examines the connection between what are arguably the two most distinguishing phenomena of the modern world: the unprecedented surges in global mobility and in the creation of politically bounded spaces and identities."--Jose C. Moya, author of Cousins and Strangers

"The importance of this collection goes beyond the confines of one geographic region as it offers new insight into the role of migration in the definition and redefinition of nation states everywhere."--Fraser Ottanelli, coeditor of Letters from the Spanish Civil War

"This volume has set the standard for future work to follow."--Daniel Masterson, author of The History of Peru


Between the mid-nineteenth and mid-twentieth centuries, an influx of Europeans, Asians, and Arabic speakers indelibly changed the face of Latin America. While many studies of this period focus on why the immigrants came to the region, this volume addresses how the newcomers helped construct national identities in the Caribbean, Mexico, Argentina, and Brazil.


In these essays, some of the most respected scholars of migration history examine the range of responses--some welcoming, some xenophobic--to the newcomers. They also look at the lasting effects that Jewish, German, Chinese, Italian, and Syrian immigrants had on the economic, sociocultural, and political institutions. These explorations of assimilation, race formation, and transnationalism enrich our understanding not only of migration to Latin America but also of the impact of immigration on the construction of national identity throughout the world.

The authors present sophisticated arguments that contribute to the understanding of race, ethnicity, and national identity in Latin America, as well as broader discussions of nation-building projects.
--CHOICE

Magnificent and illuminating. . . .the volume reveals the missing elements in studies of race and mestizaje in Latin America. . . .[and] presents compelling evidence to support the importance of timing in historical processes. . . .We can now also see the extent to which Latin America has long been a continent on the move, in which displacement and rural-urban migration have, perhaps even as much as immigration from other continents, shaped the histories of peoples, states and nations.
--H-net reviews

Significantly adds to the scant literature on the interplay of immigration, nation building and nationalism. . . . Thought-provoking and stimulating.
--Journal of Latin American Studies

Breaks new ground by presenting the topics of assimilation, race formation and transnationalism to support an overall argument about how the development of Latin American nations was closely linked to global migratory currents.
--Bulletin of Latin American Research