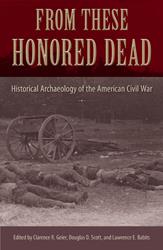 From These Honored Dead
Historical Archaeology of the American Civil War

"From These Honored Dead is a significant addition to the literature on the archaeological study of the American Civil War, and of conflict in general."--William B. Lees, executive director, Florida Public Archaeology Network

"Demonstrates the value in an archaeological approach to battlefield and related sites."--David R. Bush, author of I Fear I Shall Never Leave This Island


Separating myth from fact, From These Honored Dead uses historical archaeology to uncover the truth in the many conflicting memories of the American Civil War that have been passed down through generations.

By incorporating the results of archaeological investigations, the essays in this volume shed new light on many aspects of the Civil War. Topics include soldier life in camp and on the battlefield, defense mechanisms such as earthworks construction, the role of animals during military operations, and a refreshing focus on the conflict in the Trans-Mississippi West. Supplying a range of methods and exciting conclusions, this book displays the power of archaeology in interpreting this devastating period in U.S. history.

Clarence R. Geier is professor emeritus of anthropology at James Madison University and coeditor of Huts and History and Archaeological Perspectives on the Civil War. Douglas D. Scott is retired from the National Park Service, teaches archaeology at Colorado Mesa University, and is the author of Uncovering History: Archaeological Investigations at the Little Bighorn. Lawrence E. Babits is professor emeritus and former director of the Maritime Studies Program at East Carolina University and coeditor of The Archaeology of French and Indian War Frontier Forts.

From These Honored Dead is an important addition to the growing field of conflict archaeology. Despite the thousands of histories of the Civil War, it aptly illustrates that archaeologists have much to contribute before the whole story is told.
--American Archaeology

Armed with physical evidence and the methodologies of their field, the archaeologists test and expand upon the work of historians.
--Missouri Historical Review

Shed[s] light on a complex and. . .largely unknown theater of the war between the states.
--American Antiquity

Professional archaeologists, avocational archaeologists (especially metal detectorists), Civil War historians, and reenactors can all benefit from careful reading of this volume. It is highly recommended.
--Midcontinental Journal of Archaeology

Any Civil War park managers or historians will want this book as a reference.
--Journal of America’s Military Past

From These Honored Dead exhibits a high state of academic methodology and scholarship.
--Journal of Southern History