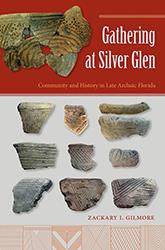 "A theoretically robust and engaging work."--Donald H. Holly Jr., author of History in the Making: The Archaeology of the Eastern Subarctic

"An intellectual tour de force that provides a significant contribution to the literature on hunter-gatherer archaeology."--David G. Anderson, coeditor of Archaeology of the Mid-Holocene Southeast


Broadening our understanding of southeastern hunter-gatherers who lived between 4600 and 3500 BP, Zackary Gilmore presents evidence that the Late Archaic community of Silver Glen--one of Florida’s most elaborate shell mound complexes--integrated people and places from throughout Florida by staging large-scale feasts and other public events.

Gilmore analyzes the composition and style of pottery at the site, revealing that many of the large, elaborately decorated vessels from the shell mounds were imports with nonlocal origins. His findings indicate that the people of Silver Glen frequently hosted large-scale gatherings that helped to create a sense of community among culturally diverse groups with homelands separated by hundreds of kilometers. The history of Florida’s Late Archaic hunter-gatherers is shown here to be much more dynamic than traditionally thought.

Zackary I. Gilmore is a postdoctoral associate in the Department of Anthropology at the University of Florida. He is coeditor of The Archaeology of Events: Cultural Change and Continuity in the Pre-Columbian Southeast.

Illuminates the historical processes that shaped Archaic groups at Silver Glen through a multi-scalar approach in his ceramic analysis.
--Cambridge Archaeological Journal