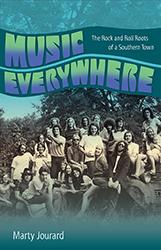 Music Everywhere
The Rock and Roll Roots of a Southern Town

“A highly entertaining, well-written look at a city that played a major role in the history of rock and roll music. Kudos to Marty Jourard on a book of historical importance.”—Kudzoo Magazine

“Jourard tells the story so that you feel you are there in the humid clubs watching history unfold in a time when regional music scenes truly were unique.”—Charles R. Cross, author of Heavier Than Heaven: A Biography of Kurt Cobain

“Jourard clearly demonstrates that Gainesville’s contributions are no less vital than those of New York City, Chicago, Memphis, Los Angeles, Seattle, and so many more.”—Marc Eliot, author of To the Limit: The Untold Story of the Eagles

“A musical rags-to-riches story that you can dance to. Here’s the story of a little southern town that made a big impact on American music.”—William McKeen, editor of Homegrown in Florida

“Gainesville is a key destination in central and north-central Florida’s growing reputation as America’s foremost incubator for important guitarists of rock and roll: Petty, Felder, Stills, Allman, Betts, Dudek, Rossington, Parsons, Campbell, and Leadon among many others. Jourard, himself part of Gainesville’s music history alongside members of his hit-making band the Motels, deserves accolades for his immersive exploration of his hometown’s myriad contributions to rock history.”—Bob Kealing, author of Calling Me Home: Gram Parsons and the Roots of Country Rock

“From Stephen Stills to the Certain Amount, from Leadon and Felder to Sister Hazel, from hootenannies to the Heartbreakers to everyone in between, this is the story of a place called Gainesville and its ever-enduring songs of the South.” —Jeff Lemlich, author of Savage Lost: Florida Garage Bands; The ’60s and Beyond

When the Beatles launched into fame in 1963, they inspired a generation to pick up an instrument and start a band. Rock and roll took the world by storm, but one small town in particular seemed to pump out prominent musicians and popular bands at factory pace.

Many American college towns have their own story to tell when it comes to their rock and roll roots, but the story of Gainesville, Florida, is unique: dozens of resident musicians launched into national prominence, eight inducted into the Rock and Roll Hall of Fame, and a steady stream of major acts rolled through on a regular basis. From Tom Petty and the Heartbreakers to Stephen Stills and the Eagles’ Don Felder and Bernie Leadon, Gainesville cultivated some of the most celebrated musicians and songwriters of the time.

Marty Jourard—a member of the chart-topping band the Motels—delves into the individual stories of the musicians, businesses, and promoters that helped foster innovative, professional music and a vibrant creative atmosphere during the mid-sixties and seventies. The laid-back southern town was also host to a clash of cultures. It was home to intellectuals and rednecks, liberals and conservatives, racists and civil rights activists, farmers, businessmen, students, and hippies. Although sometimes violent and chaotic, these diverse forces brought wild rock and roll energy to the music scene and nourished it with an abundance of musical fare that included folk, gospel, soul, country, blues, and Top Forty hits. Gainesville musicians developed a sound all their own and a music scene that, decades later, is still launching musicians to the top of the charts.

Music Everywhere brings to light a key chapter in the history of American rock and roll—a time when music was a way of life and bands popped up by the dozen, some falling by the wayside but others leaving an indelible mark. Here is the story of the people, the town, and a culture that nurtured a wellspring of talent.

Marty Jourard, a Gainesville native who released five albums and two top-ten singles with the 1980s band the Motels, is the author of Start Your Own Band. He teaches songwrit­ing classes at Cornish College of the Arts in Seattle.

Chronicles a golden era during which Gainesville was home to eight future Rock and Roll Hall of Famers and a slew of other young musicians who pursued their passion with fervor. . . . A nostalgic romp down Memory Lane.
--Gainesville Downtown

A surprising breath of fresh air. . . . An insider’s story of how Gainesville developed into an important, though relatively isolated, capital of American popular music--rock and roll in particular. . . . Rocks back and forth between the macrocosm of larger trends (the Beatles’ invasion and takeover, the growth of the hippie counterculture) and the daily lives of aspiring musicians living in or passing through Florida’s heartland.
--Florida Weekly

Explores the genesis of the music scene in this small college town that acted as a spawning ground for so many musical greats....You will find this story fascinating.
--Florida Times-Union

Marty Jourard highlights an amazing southern musical blend from this college town and an important piece in the historic musical puzzle of our country.
--Goldmine Magazine

Anyone who has called Gainesville home for even the briefest glimpse has likely heard the scattered icons that the city contributed to rock’n’roll....Music Everywhere tells the story of how the regional music scene exploded following The Beatles climb to prominence and took eight individuals from dingy bars and frat parties to the Rock and Roll Hall of Fame.
--Our Town Magazine

Jourard’s personal knowledge of a specific community over a certain period of time adds depth, texture and a tangible emotional resonance to a tale that includes so much more than music. . . . A charming read for diehard music fans and casual pop-culture historians alike.
--Creative Loafing Tampa Bay

A highly entertaining, well written, look at a city that played a major role in the history of rock and roll music. Kudos to Marty Jourard on a book of historical importance.
--Kudzoo Magazine