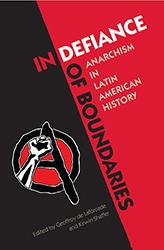 In Defiance of Boundaries
Anarchism in Latin American History

“State-of-the-art yet accessible analyses that significantly expand understanding of the role of anarchism in Latin America. . . . Will long be a standard text that provides [an] important reference for scholars and students of labor and social movement history.”—Choice

“A vivid picture of the transnational nature of the anarcho-syndicalist/anarchist movement.”—Anarcho-Syndicalist Review

"A pioneering collection of essays on the world of anarchists, anarcho-syndicalists and libertarian thinkers in Latin America."--Barry Carr, coeditor of The New Latin American Left: Cracks in the Empire

"An important contribution to a recent trend which sees anarchism not as derived from a European center but as a genuine Latin American phenomenon."--Bert Altena, coeditor of Reassessing the Transnational Turn: Scales of Analysis in Anarchist and Syndicalist Studies

"Thoughtful, well-researched, and well-written. As a collection, this goes a long way to furthering our understanding not just of anarchism in Latin America, but of anarchism more generally."--Mark Leier, author of Bakunin: The Creative Passion.

In this groundbreaking collection of essays, anarchism in Latin America becomes much more than a prelude to populist and socialist movements. The contributors illustrate a much more vast, differentiated, and active anarchist presence in the region that evolved on simultaneous--transnational, national, regional, and local--fronts.

Representing a new wave of transnational scholarship, these essays examine urban and rural movements, indigenous resistance, race, gender, sexuality, and social and educational experimentation. They offer a variety of perspectives on anarchism’s role in shaping ideas about nationalism, identity, organized labor, and counterculture across a wide swath of Latin America.

Geoffroy de Laforcade is associate professor of Latin American and Caribbean history at Norfolk State University. In addition to his published on the history of Argentine labor, he is coauthor of The How and Why of World History and coeditor of Transculturality and Perceptions of the Immigrant Other. Kirwin Shaffer is professor of Latin American studies at Penn State University-Berks College. He is the author of several books, including Anarchism and Countercultural Politics in the Early Twentieth-Century Cuba

Will long be a standard text that provides [an] important reference for scholars and students of labor and social movement history. . . . Highly recommended.
--CHOICE

A vivid picture of the transnational nature of the anarcho-syndicalist/anarchist movement.
--Anarcho-Syndicalist Review