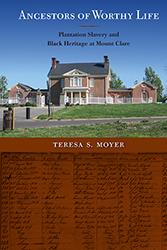 "A tour de force. Moyer goes beyond critique to give us a richly contextualized study, demonstrating that inclusive interpretation of plantation and other historic house museum sites can be done and that the failure to do so is a political act rooted in systemic racism."--David T. Palmer, University of Louisiana at Lafayette


Enslaved African Americans helped transform the United States economy, culture, and history. Yet these individuals' identities, activities, and sometimes their very existence are often all but expunged from historically preserved plantations and house museums. Reluctant to show and interpret the homes and lives of the enslaved, many sites have never shared the stories of the African Americans who once lived and worked on their land. One such site is Mount Clare near Baltimore, Maryland, where Teresa Moyer pulls no punches in her critique of racism in historic preservation.
In her balanced discussion, Moyer examines the inextricably entangled lives of the enslaved, free blacks, and white landowners. Her work draws on evidence from archaeology, history, geology, and other fields to explore the ways that white privilege continues to obscure the contributions of blacks at Mount Clare. She demonstrates that a landscape's post-emancipation history can make a powerful statement about black heritage. Ultimately she argues that the inclusion of enslaved persons in the history of these sites would honor these "ancestors of worthy life," make the social good of public history available to African Americans, and address systemic racism in America.

Teresa S. Moyer is an archaeologist with the National Park Service and coauthor of The Making of Harpers Ferry National Historical Park: A Devil, Two Rivers, and a Dream.

Through careful study of historical records and evidence from archaeological records, Moyer identifies some important areas where black enslaved laborers played significant roles. . . .[and] she points out the ways in which the experiences and contributions of the Carroll family slaves were deleted from the conversations with tourists about the Carrolls.
--Choice

In this well researched and pointedly critical book, Teresa S. Moyer has brought into view a failure that affects many museums, particularly those of the Southern United States, but also anywhere that slavery was part of America’s economic base.
--Museum Anthropology Review

Teresa Moyer’s book serves as an important bridge between the work of history, archaeology and modern activism: it gives a structure of how to begin to change the telling of the past.
--Anthropology Book Forum

Moyer has written a compelling book that accomplishes her goal of shining light on the history of the enslaved and free people of Mount Clare.
--Journal of Anthropological Research

This valuable book joins . . . other works calling for a more inclusive and just tackling of race at American historic sites.
--Journal of Southern History

Show[s] how much information a historical archaeologist can supply about the lives of enslaved.
--Journal of the Royal Anthropological Institute