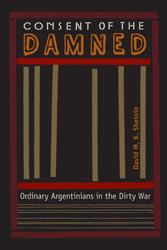 Consent of the Damned
Ordinary Argentinians in the Dirty War

"Focuses on historical reality versus historical memory in an innovative way that poses some vital questions concerning the Argentine people's relationship with the dictatorship that involved a larger measure of consent or acquiescence than previous scholars, analyses, and political groups have been willing either to admit or to explore. Sheinin does a fine job in conveying this ambiguity of the majority population toward dictatorial rule. An excellent and original piece of work."--Michael E. Donoghue, Marquette University

Under violent military dictatorship, Operation Condor and the Dirty War scarred Argentina from the mid-1970s to the early 1980s, leaving behind a legacy of repression, state terror, and political murder. Even today, the now-democratic Argentine government attempts to repair the damage of these atrocities by making human rights a policy priority.
But what about the other Dirty War, during which Argentine civilians--including indigenous populations--and foreign powers ignored and even abetted the state's vicious crimes against humanity? In this groundbreaking new work, David Sheinin draws on previously classified Argentine government documents, human rights lawsuits, and archived propaganda to illustrate the military-constructed fantasy of bloodshed as a public defense of human rights.
Exploring the reactions of civilians and the international community to the daily carnage, Sheinin unearths how compliance with the dictatorship perpetuated the violence that defined a nation. This new approach to the history of human rights in Argentina will change how we understand dictatorship, democracy, and state terror.

David M. K. Sheinin, professor of history at Trent University, is the author of five books, including Argentina and the United States: An Alliance Contained.

This book tackles the important topic of civil society’s complicity with dictatorship and state terror. The author elucidates the importance of the politics of memory, both in shaping current Argentine human rights policy and in locating responsibility for the repression in state authority and civil society.
--The Americas

A significant contribution to our understanding of the “Dirty War” and its aftermath… an argument that must be taken seriously as the fraught question of human rights continues to bedevil Argentina.
--American Historical Review

Charts new academic territory that forces the reader to reconsider how we understand dictatorship, democracy and human rights.
--The Latin Americanist

Consent of the Damned contributes to a better understanding of the attitudes of a large portion of civil society and the international community during the bloodiest years in Argentine history.
--Hispanic American Historical Review

An important contribution to our understanding of Argentina’s recent history and offers excellent background for future essential research into many of the important questions that his book raises.
--Bulletin of Spanish Studies