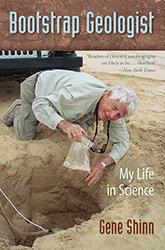 Bootstrap Geologist
My Life in Science

"The most innovative figure in marine geology has shared a lifetime of self-growth and challenging adventures in the danger zones between science and politics."--Marlan W. Downey, Bartell Professor of Geoscience, University of Oklahoma, and former president of Arco International

"Written in a frank, sometimes earthy style, Bootstrap Geologist leads the reader through life in the Persian Gulf, diving in the Gulf of Mexico, and the bureaucratic constraints of big oil. I couldn’t stop reading!"--Bruce Purser, emeritus professor, University of Paris

"Demonstrates how one can achieve professional success by combining a strong work ethic with high intellect and a willingness to learn from mentors and peers. Shinn’s spirited outlook is infectious, and his problem-solving talents have produced a remarkable set of significant discoveries."--Anthony F. Randazzo, coeditor of The Geology of Florida

Born in the Florida Keys, he attended the University of Miami on a music scholarship, where he earned a bachelor’s degree in biology. A U.S. national champion spearfisher, he worked as a salvage diver, becoming an expert in the use of dynamite underwater. A self-tutored field geologist for nearly 50 years, he made major geological findings that have significantly changed professional and academic knowledge of undersea oil reserves. Shinn helped invent technology for underwater core drilling, and more recently, he has studied the effects of transoceanic African dust on coral reefs, agriculture, and human health. He’s even the basis for a character in a mystery novel.

In Bootstrap Geologist Shinn enthusiastically shares the highs and lows of his remarkable life. Taking readers around the globe as well as below the ocean, he recounts the painstaking process of data gathering that can lead to paradigm-breaking discoveries. He emphasizes the importance of field science and pointedly addresses the use and abuse of scientific research and the emergence of market-funded research.

Eugene A. "Gene" Shinn is known worldwide among geologists, marine scientists, and petroleum engineers. Primarily self-taught with decades of hands-on field experience, he has made major geological discoveries that have significantly enhanced professional and academic knowledge. Initially handicapped by the lack of advanced degrees, Shinn’s drive, hard work, and genius led him to the top of his profession and the receipt of the Twenhofel Medal--the highest award given by the International Society of Sedimentary Geology.

"Shares the ups and downs of his career, his inventions, research, and his experiences in exotic parts of the world – and is more than able to explain the technical aspects of geological, earth, and marine science in a clear, very readable manner."
--Reference & Research Book News

"An absolutely delightful read… his gentle wit shines from every page… read the book, and become a friend of a most remarkable man."
--AAPG Explorer

“This book is a wonderful present to society.”
--Sedimentary Record

“Shinn invites the reader along in a conversational, enthusiastic style… readers of Mr. Shinn’s autobiography are likely to be… charmed. It is to be hoped, for science’s sake, that he is not truly one of a kind.”
--The New York Times

“Highly readable book looks at some of the most important issues facing Florida and the world, explaining them in layman’s terms that draw a reader into the heart of the scientific debate.”
--Bay Soundings

“Anyone interested in modern and ancient reef systems will find much to captivate them in Shinn’s entertaining memoir of his industrious and energetic life in sunshine and sea-water.”
--Canadian Field-Naturalist