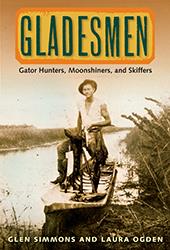 "Remarkable. . . should have strong, immediate interest for the ecologists engaged in efforts to restore the Everglades."--William B. Robertson, research biologist for Everglades National Park

From the book--
Pa built our house out of rough lumber that they got from Frazier’s sawmill . . . a one-room house about 16 to 18 feet long and 12 feet wide. We all slept on cots and sat on boxes or a trunk. The kitchen was in the corner, and Ma cooked on a four-hole stove, which cost six dollars. Me and my middle brother, Alvin, sat on a trunk to eat at the table. That trunk had some long cracks in it. My brother knew just how to move so the crack would pinch . . . .


Years before the Park was established, when all the land and marsh seemed to belong to me, we would help ourselves to whatever we could see or trade for survival. Mostly we would sell gator and otter hides. . . . On this particular trip, after grunting awhile at the gator hole, I gave up and made tracks to the camp since I wanted to return by dark. . . . I was lying under my skeeter bar with a small tarp stretched between two cabbage palms. About midnight, I heard the dried cabbage fronds breaking in the path toward my camp. The night was pitch black . . .


Few people today can claim a living memory of Florida's frontier Everglades. Glen Simmons, who has hunted alligators, camped on hammock-covered islands, and poled his skiff through the mangrove swamps of the glades since the 1920s, is one who can. Together with Laura Ogden, he tells the story of backcountry life in the southern Everglades from his youth until the establishment of the Everglades National Park in 1947.
During the economic bust of the late ‘20s, when many natives turned to the land to survive, Simmons began accompanying older local men into Everglades backcountry, the inhospitable prairie of soft muck and mosquitoes, of outlaws and moonshiners, that rings the southern part of the state. As Simmons recalls life in this community with humor and nostalgia, he also documents the forgotten lifestyles of south Florida gladesmen.
By necessity, they understood the natural features of the Everglades ecosystem. They observed the seasonal fluctuations of wildlife, fire, and water levels. Their knowledge of the mostly unmapped labyrinth of grassy water enabled them to serve as guides for visiting naturalists and scientists. Simmons reconstructs this world, providing not only fascinating stories of individual personalities, places, and events, but an account that is accurate, both scientifically and historically, of one of the least known and longest surviving portions of the American frontier.

Glen Simmons has lived in the south Florida Everglades since his birth in 1916 in Homestead. In 1995 he was awarded a State of Florida Heritage Award for his unique contribution to Florida's history and folk culture. He has demonstrated and taught glades skiff building for the Florida Department of State, Bureau of Folklife, and the South Florida Historical Society; his boats are on permanent display at the Florida Folklife Museum in White Springs, Florida, and at the Historical Museum of Southern Florida, Miami.


Laura Ogden, also born in Homestead and a life-long friend of Glen Simmons, is assistant professor of anthropology at Florida International University.

"as important as it is fascinating. Not only does it serve as a vehicle for Simmons' wonderful stories of the virgin Everglades, but the book, co-authored by anthropologist Laura Ogden, documents the lost culture of the men and women who made their lives in Florida's famously inhospitable swamp."
--Lake City Reporter

"South Florida's nearly gone Everglades pioneers . . . suffered almost as much as the Everglades from land booms and busts but did so with an unsentimental, self-effacing grace." "Much of their guts and ingenuity is captured in Gladesmen: Gator Hunters, Moonshiners and Skiffers, the third volume of a series devoted to Florida's history and culture. The book is a labor-of-love memoir by Simmons, born in 1916 in a one-room cabin in Homestead, and anthropologist Laura Ogden, daughter of Everglades National Park ornithologist John Ogden." "Storms will always come and go in South Florida, but the hardy, brave people Simmons celebrates came only once. Theirs was a special time."
--Miami Herald

"Glen Simmons is South Florida's Davy Crockett: king of its wild frontier, the Everglades." "While Marjory Stoneman Douglas' famous 1947 prose poem, The Everglades: River of Grass, soars aloof above the 'vast, glittering wilderness,' Simmons thrusts you into the razory sawgrass where you can feel the swarming mosquitoes landing on your face." "The book is an homage to the rugged 'swamp rats' who were largely overlooked or scorned by the region's historians, naturalists, and adventurers."
--Miami Herald

"There aren't many men who have lived a life like Glen Simmons. But when your home is a million acres unlike any other land in the world, then a unique life is easy to understand." "Gladesmen is the story of his life in the Everglades fromthe 1920s to the 1960s. . . . Written largely in his own words, this captivating book recalls the days not too long ago when the Everglades was a frontier." -- The Orlando Sentinel
--Orlando Sentinel

"We Floridians sometimes enjoy imagining what our state was like before development, traffic and overpopulation ruined so much of its beauty. We long for the simple life of pioneers and wonder how we would manage 'living off the land.'" "This book serves as a slap in the face of such fantasy. Born in the Everglades in 1916, Glen Simmons sets the record straight. 'We was so poor we didn't even have roaches.' Simmons was a fisher, trapper, hunter, tick eradicator, alligator poacher and boat builder. He preferred being known as a 'gladesman.' What an interesting book he has fashioned with the help of anthropologist Laura Ogden." "Simmons' fascinating book allows us a safe visit into the Everglades of harsh yesteryears. Most of us wouldn't want to live there." -- St. Petersburg Times
--St. Petersburg Times

"It is difficult to believe, but there was a time when South Florida was not populated with Rust Belt retirees, packed with strip malls, and landscaped like the world's largest golf course. . . . This book is part of a series designed to preserve Florida's history, and Simmons contributes admirably. Lay readers will appreciate his work, but it will be of particular interest to ecologists, conservationists, and even hunters and fishers." -- Publishers Weekly
--Publishers Weekly

"Glen Simmons tells us that he is no hero, but he is the stuff of Daniel Boone, Davey Crockett, Jim Bridger, and Alfred Wallace." "Set against the Everglades environment filled with colorful place names and exotic wildlife, you'll discover memorable characters scratching out a meager living under the Florida sun." -- Florida Frontier Gazette
--Florida Frontier Gazette

"A well-crafted work that documents an aspect of Florida history and culture of which far too little has been written. . . . A fully annotated, solid piece of scholarship that is alive with South Florida history and spiced with Simmons' understated humor and world view." -- Folk Winds
--Folk Winds - Florida Folklore Society

"Simmons and Ogden have prevented a seemingly forgotten cultural tradition from disappearing into the dustbin of history. By doing so, Gladesmen has achieved a major goal of the Florida History and Culture Series -- that is, it promotes a richer understanding of the state's history. Series editors Gary R. Mormino and Raymond Arsenault, as well as the Press, all warrant praise for making this refreshing book possible. It is worthy of, and will find, a wide audience." -- Florida Historical Quarterly
--Florida Historical Quarterly

"Glen Simmons is Florida's answer to Huckleberry Finn. Gladesmen: Gator Hunters, Moonshiners, and Skiffers records his memories of wild times and manly freedom in the Florida Everglades. Packed with honesty and humor, Gladesmen is a delightful environmental memoir. . . . It is a valuable edition to a Florida history collection and a fine addition to the new Florida History and Culture Series." -- Georgia Historical Quarterly
--Georgia Historical Quarterly