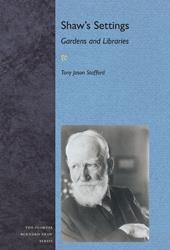 "Stafford analyzes with acuity the heretofore unexplored leitmotifs of gardens and libraries that form a rich subtext in nine important plays."--Michel Pharand, author of Bernard Shaw and the French

"The author’s enthusiasm for Shaw and in-depth knowledge of his works shine out. Stafford not only shows the surprising frequency of gardens and libraries as settings in Shaw’s plays, but he uses the interpretation of these scenes to explore aspects of the plays that are generally overlooked, adding significant new thematic insights, as well as underlining the importance of scenery in the understanding of stage plays."--Christopher Innes, editor of The Cambridge Companion to Bernard Shaw


Picture the young George Bernard Shaw spending long days in the Reading Room of the British Museum, pursuing a self-taught education, all the while longing for the green landscapes of his native Ireland. It is no coincidence that gardens and libraries often set the scene for Shaw’s plays, yet scholars have seldom drawn attention to the fact until now.

Exposing the subtle interplay of these two settings as a key pattern throughout Shaw’s dramas, Shaw’s Settings fills the need for a systematic study of setting as significant to the playwright’s work as a whole. Each of the nine chapters focuses on a different play and a different usage of gardens and libraries, showing that these venues are not just background for action, they also serve as metaphors, foreshadowing, and insight into characters and conflicts. The vital role of Shaw’s settings reveals the astonishing depth and complexity of the playwright’s dramatic genius.


Tony Jason Stafford, professor of English at the University of Texas at El Paso, is the editor of Shakespeare in the Southwest: Some New Directions.

“Stafford focuses a sensitive eye on nine of Shaw’s dramas… to show how the dramatist strategically deployed gardens and libraries to convey meaning in a visual and compelling manner.”
--Choice

Stafford’s analysis of the library-garden motif provides insight not only into individual plays but also into Shaw’s development as a playwright. . . .A valuable contribution to Shaw studies and to the scholarship of modern drama through its thoughtful exploration of the convergences, divergences, and resonances of a well-chosen pair of settings.
--Text & Presentation

Will provide valuable illumination to many readers. . . .[Stafford] recognizes and establishes firmly that these plays do need to be approached and discussed as theatrical works and judged accordingly.
--English Literature in Transition

Stafford traces the playwright’s adept and varied deployment of two recurrent settings, the garden and the library, through nine major plays that span three decades, to demonstrate how meaningfully Shaw intertwines stage environment with the verbal pyrotechnics and discussion-based dramatic style for which he is so well known. Stafford approaches the plays as both literary and performance texts and deftly illustrates how Shaw employs these two settings in his campaigns against (among other things) capitalism and romantic idealism
--Comparative Drama

Takes an interesting approach to Shaw’s plays, arguing that libraries and gardens stand for more than background and are metaphors for the drama.
--Books Ireland