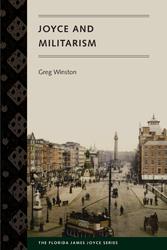 "Greg Winston has produced a marvelous, deeply researched, and lucid story of Joyce's exploration of the personal and social effects of the European cult of militarism. This is a significant contribution to interpretations of Joyce, capitalizing on both cultural studies and political approaches. It is loaded with scholarly discoveries that will illuminate readings and delight readers."--R. Brandon Kershner, editor of Joyce and Popular Culture

"The military and their domestic counterparts, the police, were omnipresent in the world of James Joyce, as was militarism in the literature and society that formed him. Winston ably traces the impact of these realities on the literature Joyce created, works that, as acts of resistance, ultimately move toward imaginative demilitarization."--Thomas Jackson Rice, author of Cannibal Joyce

Each of James Joyce's major works appeared in a year defined by armed conflict in Ireland or continental Europe: Dubliners in 1914 at the outbreak of the First World War; A Portrait of the Artist as a Young Man in the same year as the 1916 Easter Rising; Ulysses in February 1922, two months after the Anglo-Irish Treaty and a few months before the outbreak of the Irish Civil War; and Finnegans Wake in 1939, as Joyce complained that the German army's westward advances upstaged the novel's release.
In Joyce and Militarism, Greg Winston considers these masterworks in light of the longstanding shadows that military culture and ideology cast over the society in which the writer lived and wrote. The first book-length study of its kind, this articulate volume offers original and interesting insights into Joyce's response to the military presence in everything from education and athletics to prostitution and public space.

Greg Winston is professor of English at Husson University.

Heavily researched and infinitely fascinating… Makes a very effective and entertaining argument that Joyce’s criticism and protests regarding the British military presence in Ireland permeate his fiction.
--English Literature in Transition, 1880-1920

This insightful and well-researched volume will be of interest not only to Joyceans but to all those interested in Irish and European political and cultural studies dealing with the crucial decades at the turn of the twentieth century… Joyce and Militarism is a deeply worthwhile contribution to Joyce studies and testament to the enduring quality and importance of the Florida James Joyce Series.
--Studies: An Irish Quarterly Review

An indispensable guide to Joyce’s portrayals of the all-pervasive reach of militarist values in colonial Ireland. It is well researched, jargon-free, accessibly written and should be of value to those interested in representations of imperialism in Irish fiction as well as scholars of Joyce’s four main texts.
--Irish Studies Review

An exemplar of that continually surprising genre, the study that takes a Joycean topic we thought we knew well and re-opens it in an illuminating investigation that changes our understanding of Joyce’s writing. . . .Winston’s monograph is richly researched, skillfully focused, and lucidly written.
--James Joyce Quarterly