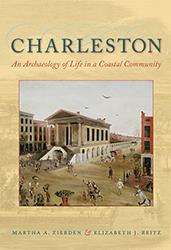 Charleston
An Archaeology of Life in a Coastal Community

“The authors succeed admirably in marshaling an immense body of research, conducted by themselves and many others over the course of decades, into an accessible and fascinating book.”—Journal of Southern History

"An amazing book, representing years of work and dozens of excavations and presenting a continuous chronology of a colonial city from the seventeenth to the nineteenth century. No other city in America has this kind of archaeological record."--Nan A. Rothschild, coauthor of The Archaeology of American Cities

"A must-read for those interested in food and foodways, urbanization, and the untold history of one of America 's oldest cities."--Russell K. Skowronek, coeditor of Pieces of Eight: More Archaeology of Piracy

"Provides a unique guided tour of the city's vibrant legacy, skillfully weaving a complex tapestry of archaeological and historical discoveries. Charleston is not to be missed."--Jerald T. Milanich, author of Laboring in the Fields of the Lord: Spanish Missions and Southeastern Indians


Charleston, South Carolina, is one of the most storied cities of the American South. Widely recognized for its historic buildings, its thriving maritime culture, and its role in the Civil War, Charleston is also considered the birthplace of historic preservation. Martha Zierden and Elizabeth Reitz--whose archaeological fieldwork in the city spans more than three decades--explore the evolution of the urban environment, the intricacies of provisioning such a robust city, and the urban foodways that continue to inspire Charleston's culture.

In Charleston, Zierden and Reitz weave archaeology and history to illuminate this vibrant, densely packed Atlantic port city. They detail the residential, commercial, and public life of the city, the ruins of taverns, markets, and townhouses, including those of Thomas Heyward, shipping merchant Nathaniel Russell, and William Aiken. The authors shed light on the dynamics of production, distribution, and consumption of goods and services that linked the city with rural neighbors and global markets. They also trace fish and game from the woods and waters to the kitchens where the food was prepared and the tables where it was served. Zierden and Reitz reveal how global trade goods combined with indigenous flavors to create a cuisine that was uniquely Charleston.

The artifacts unearthed show how Charleston continued to grow and develop as it contended with public health initiatives necessitated by post–Civil War changes, the fire of 1861, and the earthquake of 1886. They also testify to the city's arts and finery and to the challenges experienced by laboring slaves, house servants, and other underprivileged citizens. By reminding us that urban areas shape and are shaped by their inhabitants, Charleston evokes the essence of the deeply complex city whose influence was felt throughout the Atlantic World.


Martha A. Zierden is curator of historical archaeology at The Charleston Museum and has been involved in every major excavation in Charleston since 1980. Elizabeth J. Reitz, professor of anthropology at the University of Georgia, is coauthor of Zooarchaeology, second edition.

The authors succeed admirably in marshaling an immense body of research, conducted by themselves and many others over the course of decades, into an accessible and fascinating book.
--Journal of Southern History

A very good summary of historical archaeology in the city up to A.D. 1900. . . . Most fascinating is how the book documents how collaboration among professional archaeologists, the Charleston Museum, the city, nonprofits, and private owners, created a long-term, successful urban archaeology and historic preservation program that has been a major factor in Charleston’s renaissance in the late twentieth century.
--Anthropology Book Forum