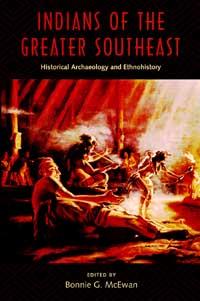 Indians of the Greater Southeast
Historical Archaeology and Ethnohistory

"If you have ever wondered about the Indian tribes who lived in the American Southeast at the time of European settlement, this book is for you. . . . Eleven of the nation’s top historical archaeologists tackle eleven of the Indian nations that occupied the territory from Florida to Texas. They include some of the best known but little-understood American tribes--the Cherokee, the Natchez, and the Caddo."--American Archaeology

"A critically needed summary of current knowledge of southeastern Native Americans during the colonial encounter. . . . For historians, archaeologists, and ethnohistorians, this is a valuable source of information which was previously hard to find."--Elizabeth J. Reitz, University of Georgia

"This important volume will be of interest to anyone, whether scholar or layman, who wants to learn about the Indians of the southeastern United States. The authors are among the most respected authorities on the Indian societies chosen for inclusion."--Chester B. DePratter, University of South Carolina

This volume brings together a stellar group of scholars to summarize what we know of the development of native American cultures in the southeastern United States after 1500. The authors integrate archaeological, documentary, and ethnohistorical evidence in the most comprehensive examination of diverse southeastern Indian cultures published in decades.

Contents
Introduction by Bonnie G. McEwan
1. The Timucua Indians of Northern Florida and Southern Georgia, by Jerald T. Milanich
2. The Guale Indians of the Lower Atlantic Coast: Change and Continuity, by Rebecca Saunders
3. The Apalachee Indians of Northwest Florida, by Bonnie G. McEwan
4. The Chickasaws, by Jay K. Johnson
5. The Caddo of the Trans-Mississippi South, by Ann M. Early
6. The Natchez of Southwest Mississippi, by Karl G. Lorenz
7. The Quapaw Indians of Arkansas, 1673-1803, by George Sabo III
8. Cherokee Ethnohistory and Archaeology, by Gerald F. Schroedl
9. Upper Creek Archaeology, by Gregory A. Waselkov and Marvin T. Smith
10. The Lower Creeks: Origins and Early History, by John E. Worth
11. Archaeological Perspectives on Florida Seminole Ethnogenesis, by Brent R. Weisman
This title is published in conjunction with the Society for Historical Archaeology
Bonnie G. McEwan is director of archaeology at Mission San Luis in Tallahassee, Florida. Her publications include The Spanish Missions of La Florida, The Apalachee Indians and Mission San Luis (with John H. Hann), and numerous monographs and journal articles.

"a valuable overview of archaeological studies for the contact period, deserves reading by all scholars interested in southeastern Indians. The essays will be invaluable resources for specialists, and libraries will want this book for their collections." - Alabama Review
--Alabama Review

"Uniformly accessible and informative, these articles are commendable for bringing to light recent research in historical archaeology that remains hidden from most scholars. It will, no doubt, become a standard reference for all scholars who are interested in early Southeastern Indians." - Louisiana History
--Louisiana History

"This is a much-welcomed summary of the southeastern Indians. Many of these cultures have witnessed a great deal of research recently and this volume is, to my knowledge, the only work that summarizes it." - SAS Bulletin
--SAS Bulletin

"the archaeologists/ethnohistorians represented have much to offer, and historians will do well to welcome what they present." "efforts such as the one offered her are a significant step toward bringing many vital archaeological discoveries and theories within historians' reach. The result of such an effort will ultimately be better history, as archaeologists and historians join forces to refine out collective knowledge about the past." - The Journal of Southern History
--Journal of Southern History